Third favorite World Premiere displayed a strong stayer performance beating the race favorite near the wire to claim this year's Tenno Sho (Spring) behind closed doors once again, void of the fans at Hanshin Racecourse. It is the second G1 victory for the 2019 Kikuka Sho (Japanese St. Leger) winner who has overcome a setback after finishing third in the 2019 Arima Kinen (G1, 2,500m). Sidelined for nearly a year, the Deep Impact colt made his comeback in the Japan Cup (G1, 2,400m) last autumn with a promising sixth, followed by a fifth in the Arima Kinen a month later and has just come off a third in the Nikkei Sho (G2, 2,500m) on March 27. This is trainer Yasuo Tomomichi's 13th overall JRA-G1 victory and first since winning the Kikuka Sho with the horse in 2019. He also celebrates his second Tenno Sho (Spring) title after winning it with Admire Jupiter in 2008. Jockey Yuichi Fukunaga, the successful rider of last year's Triple Crown victor Contrail, pocketed his 29th JRA-G1 win today and first Tenno Sho (Spring) trophy emulating his father and former jockey Yoichi Fukunaga who won the race in 1976.

Breaking from the innermost stall, World Premiere was unhurried on the rails in seventh, a couple of lengths behind second favorite Aristoteles who sat another couple of lengths behind the front group led by Diastima. As the field made their moves after the third corner, the son of Deep Impact chased Aristoteles into the lane, picked him off from the outside before the furlong marker and closed in strongly on the front runners with a tenacious stretch run. While Diastima weakened on the rails, World Premiere finally pinned and stole the lead from Deep Bond and Curren Bouquetd'or 100 meters out, clearing the wire 3/4 length in front of Deep Bond for the win.

"We had a weak start but recovered well since with the advantage from breaking from stall #1, and kept our eyes on the favorites from behind throughout. I shifted him outside a little earlier than planned to secure a good striking position. He responded incredibly with a good turn of foot. It's a great honor to have won such a prestigious race like this," commented Yuichi Fukunaga.

Race favorite Deep Bond broke sharply from a wide stall and was settled in fourth to fifth and three-wide in the back of the leading group. Maintaining his good striking position, the Kizuna colt entered the lane in third and chased the two in front persistently but was caught by World Premiere in the last half-furlong before overhauling the tiring Diastima and then Curren Bouquetd'Or in the final strides for third.

Five-year-old mare Curren Bouquetd'or saved ground on the rails in third up to the third corner of her first long-distance challenge and kicked into gear taking over the lead from Diastima before hitting the top of the straight. While trying hard to shake off the stubborn Diastima, the fourth favorite ran out of steam and gave in to the fast-closing World Premiere and Deep Bond to finish a two-length second. 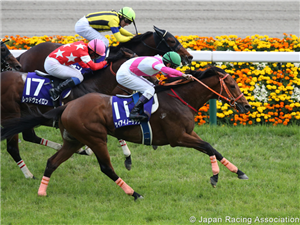