Menifee, has regained the title of Leading Sire in Korea for 2019, clear of nearest rivals Hansen and Ecton Park.

Menifee, who passed away last June, has regained the title of Leading Sire in Korea for 2019, ending the year 840 Million Korean Won clear of nearest rival Hansen. Ecton Park, who won the title in 2018, was 3rd.

Menifee and Hansen had exactly the same number of runners, 135, across the year with Menifee's making more starts but Hansen's winning more races. Crucially, Menifee got more big race winners, principally New Legend in the President's Cup, while Hansen's top earner was the two-year-old Doctor Carson. Ecton Park (Isidore Farm) retains his status as the Leading Privately Standing Sire in Korea (Menifee and Hansen both being KRA sires) and there are other welcome entries in the top ten for the privately standing Testa Matta (Nokwon Farm) and Thunder Moccasin (Pegasus Farm), the latter especially having been a revelation over the past year.

The highest placed stallion on the list who is based outside of Korea was Pioneerof The Nile in 18th place. 1.5 Billion of the 1.7 Billion he accrued was earned by his Korea Cup and Grand Prix Stakes winner Moohak Chief.

While Hansen's progeny are yet to break through at the Group 1 level in Korea, their sheer consistency at winning at lower levels means that it seems only a matter of when and not if he takes over at the top. Hansen comfortably ran out the Leading Sire of 2-year-olds with Menifee back in 4th place. Officer, whose Roller Blade won all three legs of the Juvenile Series was in 2nd place with newcomer Old Fashioned in 3rd.

Accordingly, Old Fashioned led the list of First Crop (in Korea) Sires ahead of Musket Man. A word too for Gyeongbudaero, the President's Cup and Grand Prix Stakes winner in 2015, who has produced five winners from thirteen individual runners. 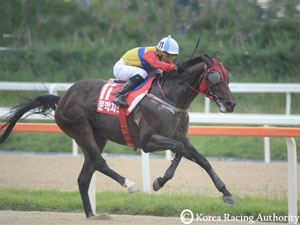