Juveniles to start with and eight of the twelve race for the very first time. (4) DOCTOR CAESAR put in an underwhelming trial in July but returned a couple of weeks late and looked extremely competent as he was held together well and ran on with minimal urging to cross the line significantly ahead of the rest and in a good time. He draws well here and can win on debut. (11) B. K. MARSHALL is one of the four with prior experience. He debuted on August 14th when he managed to quickly find the rail and run on well for 3rd place behind Again Touch. The draw isn't so favourable today but he should have benefited from that experience and is a real chance. (9) MONGTTANG too should have come on for his debut when he finished in midfield in a fair time on July 16th. He may be looking for further but should improve second-up. (10) STELL LUNA and (12) MENIFEE SONG are among other debutants who trialed well and have money chances.

(4) GLORY KING did nothing on debut in January but was then put away for six months and having blitzed a June trial, ran a front-running 2nd on his return to racing on August 1st leading for much of the way before going down to the promising Doctor Texas in a good time. From a good gate, he will be on pace again and in a race of little form, he should be far too good. (1) MYEONGSEONG CHARGE trialed up in the same heat as Doctor Caesar (who was due to run in race 1). She was close to the pace throughout and while she was passed by a few late on, has every chance of going well on debut from a nice inside draw. (11) WIND HIGH debuted in that same race on August 1st and while unspectacular didn't do a huge amount wrong. She had previously shown some speed in a trial and with natural improvement can get closer today. (12) DAEJI CHOICE is done no favours by the draw but hinted at ability with a 4th place over 1000M last start and can be in the mix here. (6) GREAT ELL comes down a full 4kg in the weights due to an apprentice up and can be given a chance.

(4) ADELE SUCCESS has been knocking on the door with a 3rd and a 2nd from her latest two outings, most recently when leading from the gate until the 200M over this distance on August 13th before ultimately going down to K Chukje. That's two fast times in a row now, the weight remains light and she draws nicely with every chance of going one better this time. (7) MY DESTINY has a couple of decent runs to her name at this distance with a 2nd and a 3rd in competitive times. She weakened a little late on at her last start but can be given another chance here. (9) MANY CASH was a significantly improved 3rd at start number four last time out when she broke well, then settled back in the field before running on strong. She can build on that today. It took (1) MORE THAN SKY three goes to qualify but she looked well when finally doing it on July 30th, winning her heat in a fair time and nicely drawn on the inside, she can be a factor first-up. (2) UNBRIDLED QUEEN is first up and will need this but trialed adequately.

Super race. (11) SUCCESS MACHO is three from three so far and comes in off a fourteen-length demolition job at this distance at class 5 level on July 4th. He is up in class today and he has drawn wide but he has overcome the latter before and he can maintain his 100% record here. This should be a stern examination though. (7) DOMINATION is resuming for the first time since March when he got the most recent of a hat-trick of front-running wins. He trialed up very nicely two weeks ago, winning his heat in a fast time and draws nicely to steal a march on Success Macho and also meets him at favourable weights. He has a chance but it is his first try at the distance. (2) ROCK PEGASUS is a proven class and distance winner having beaten a couple of these on his way to a good score on August 1st when he settled in midfield and ran on well. He comes up in the weights today but should be competitive. (4) ACE SOLOMON comes up in class following a good win over 1200M. He is up in trip but down in the weights and can measure up in tough company. Plenty of others have at least placing chances with (10) MUJEOK BULPAE, who has run very consistent times, chief among them.

A very competitive race and with an evenly matched field it may be that those who can get an easy run early have the best of it. With that in mind, we'll side with (2) SEONGSAN HERO, who while still a maiden is proven at this distance with a solid 4th place last time out on August 20th when he beat a couple of these. He comes in at the same weight and from a great draw should be on the speed with every chance. On his inside is (1) BULMYEORUI GIL He ran 6th in that race on August 20th when he got well back and then ran on. He is up in weight but well drawn and has recorded solid times at this distance. (6) CHEONGDAM DRIVE is another who remains a maiden but has finished in the top four on seven of twelve occasions. He has run well at 1400M and over a mile and while he comes up in class, he is down in the weights and will likely be on the early pace here. (12) CENTUM THOR beat Cheongdam Drive as the pair ran 2nd and 3rd at a mile at class 6 level in July before running 4th over 1400M on his first try at class 5 on August 1st. He came from well off the pace that day and can potentially overcome the widest gate. (10) DUMUSAN, under a light weight and with the fastest time among any of these who have tackled the distance, is another one with placing claims.

Another race of many chances. (4) SEUNGNI TOUT was a winner over a mile at class 5 level two starts back before proving he measures up at this class with a good 4th at today's distance on July 4th. Seo Seung-un returns to the mount today and from a good draw, she has as much chance as any of coming home on top here. (1) GOLD FOUNTAIN is a real danger. A winner of three from six so far, he tackles 1800M for the first time but he has won over a mile and his racing style suggests two turns will suit. He comes up in the weights but looks to have more wins in him and it would be no surprise were he successful today. (9) ACE JACKPOT is a winner at 1800M at class 5 level and while he comes up in class looks sure to run the distance out/ The draw is not in his favour but he comes down in the weights. (3) TOP MATE is thoroughly consistent and enters off an excellent 2nd place at class and distance on August 13th when he beat a couple of today's rivals. He carries even more weight today but is a tough competitor and can measure up again. The wildcard is (8) LUCKY BREAK, who is rapidly up in class. She has plenty of ability and a nice light weight although the draw is not in her favour and it is her first go at the distance.

(9) YEONGUNG LOUIS is a winner of three from five so far and was runner-up in the other two including last time when over 1400M he couldn't quite match up to Heat Yegam. There was no disgrace in that at all as that horse went on to win again very easily last Friday and Yeongung Louis, despite the wide draw and the big weight, is favoured to return to the winner's circle today. Drawing even wider is (11) AKER'S DREAM. He beat four of these when scoring at class and distance on July 31st and while up a full 3kg in the weights, should be going close again. (6) CHOEGANG SSONSAL had a poor day at the office last time out but has a couple of scorching performances to his name, including the fastest time of any of these at this distance and from a good central draw, can return to some form here. (12) ADELE SPIKE and (2) WONDERFUL PEACE are among others in the frame in a competitive finale. 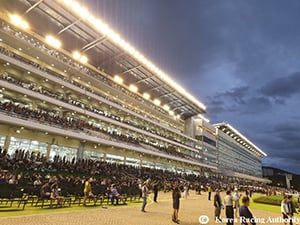