Fillies only to kick things off. Six of the twelve have raced before and one of them is a prior winner. That's (2) DONGBANUI SIJAK, who scored on debut back in October over 1200M. She ran poorly on reappearance but bounced back with a 3rd place just before Christmas. She drops back to the short course for the first time today and is in with a shout. So too (7) SEOBU QUEEN. A half-sister to the outstanding Seobu Cat, she ran 3rd on debut at this distance before running out of steam a little second-up at 1200M but drops back today and into contention. As for the first-timers, the standout is (4) BLACK OLIVE. She was an accomplished 3rd in a fast trial behind two experienced racehorses and should go well first up. (1) RAON THE BLUE did absolutely nothing in her two trials but she is a half-sister to an Oaks winner (as well as a few ordinary ones too) and has a top jockey on so may attract some interest. Returning to those with experience, (6) PARTY INDY has two 5th place finishes among three starts to date and can aim for some minor money again.

(1) AFLEET TAPIT didn't do an awful lot on debut over 1200M back in October but returned with a positive trial two weeks ago and looks set to improve today. Likely favourite and one to beat though is (3) DONGNAM BULPAE. While he hasn't shown a lot in the way of speed across three starts to date, he impressed with a front running 2nd over this distance last time out from a favourable draw again, can go one better this time. Also expected to be on pace will be (6) KING BID. He came home 5th last start beating a couple of these in the process, having previously run 3rd at 1000M. Seo Seung-un remains aboard and he should go close. Plenty of others have the potential to step up into the placing frame with (9) DREAM DANCER and (8) WONDERFUL SMARTY perhaps the best credentialed to do so.

After running 4th on debut all the way back last July, (13) ETERNAL HERO returned in November and closed out the year with back to back runner-up finishes over 1200M. He gets another crack at class 6 today and stepping up to 1400M for the first time, can defy the wide draw to make the breakthrough. (10) KING BROTHER comes in off a 2nd place last start when he beat a couple of his rivals here. He has mixed his form over seven outings to dare but does have experience of the distance and looks a solid place chance. So too does (3) GREAT GO. She too beat two of these on his way to a useful 4th continuing a positive run of form. The filly can settle in midfield and finish strongly and having a 5th to her name over a mile already means there shouldn't be any questions about the trip. (4) K K WON came from off the pace to run a much improved 3rd on his latest start and is another who can be considered for the minors. (7) FIRST WIND and (8) STAR EYE should also be in the hunt.

Fillies and mares only here. (1) ADELE PUPIL was a smart winner on debut back in July last year over 1200M. She's not raced since but trialed two weeks ago in adequate fashion. The trip looks likely to suit and it's not impossible she could win first-up again, despite being up in class. She may need this though so punters may be tempted by a couple of others. (7) MARK ACE is perhaps the most likely. She's never been worse than 5th in five starts to date and comes in off a strong 3rd over 1200M. (9) ACHIM BIT is similar, having run on well for 3rd in both her latest two outings and the additional trip may suit here. (11) PORRIMA has been the bane of punters – or at least tipsters – in the past, frequently looking like she is just one race away from breaking through only to just come up short. A couple of months off may have done her good and while she can't be put on top, she may well place. (2) JANGMI GONGJU, a last start 3rd, is another in the frame.

Competitive race here. (3) RAON SKY MAN won his first two and while it has seemingly taken him a couple of races to get to grips with this level of racing, he comes in here following a strong 3rd place over this distance in a decent time just before Christmas. He has experience of the distance and shouldn't be far away today. (5) YESULUI GYEUNGJI likewise began her career in a hurry with two wins from her first three before stuttering a little. She too is back in form with a front-running 2nd last start and has claims to go one better today. (6) WINNING DANCER is two from four so far and her class and distance 7th last start was no disgrace at all. She should have come on from that and has the combination of a top jockey and a very light weight on her back. The only last start winner in the field is (14) CAPTAIN STEALTH. He came from well off the pace to score at this class over 1200M on December 19th. The outside gate shouldn't cause too many problems and he can go close again.

(2) YEONGSEONGTEUKGEUP won two in a row at this distance at class 6 level last autumn and while he finished off the year with a bad day at the office on his first try at this class in December, not recovering from a bad start, he looks the quality in this race and should return to winning ways. (9) SISEON GANGTAL finished ahead of Yeongseongteukgeup that day. He is consistent and benefits from an apprentice jockey taking a full 4kg off his back today which should put him right in the mix once again. (7) YEONGGWANGUI START is another who mixes his form. From a good position, he got swamped late on and ultimately finished 10th last start but the margins were small and he is capable of running both a good race and a good time at this distance. The wildcard is (11) TOP BEST. He began his career promisingly back in 2019 but showed little in two appearances during last year's abbreviated summer season. He looked great though when winning a trial at the end of January and if he brings that form into the race, he surely goes close.

He's had a few reversals of late but (1) MIRACLE DREAMING should have too much for this field. He's beaten plenty of them in recent starts and from the inside gate, Franco Da Silva can sit just off the lead and be too strong in the closing stages. (5) I'M YOUR FASHION has a terrific record of five wins from ten starts and while he has just gone off the boil a touch in his latest two, he seems likely to get back to winning ways sooner or later and is the biggest danger to the favourite here. Having said that, (10) BANJIUI JEONSEOL actually beat Miracle Dreaming when the two of them raced back in November. He is a touch inconsistent but shouldn't be too far away again. (8) ROSA won back to back races last summer. She wasn't at her best when returning to action in January but should have come on for that run and can improve today.

(14) CLEAR was an emphatic winner on debut in December, making all to win by as many as he pleased over 1200M. The Flashback gelding steps up to a mile today but there is nothing to suggest it won't suit and the additional distance should lessen any disadvantage of the outside gate. It won't be easy though. (9) POKPUNG EONDEOK may only have broken through at start number eight in December but he had been consistent prior. The Violence colt beat three of these over 1400M last time and steps up to a mile with confidence. (4) YEONGGWANGUI SAVE and (3) FREEDOM KNIGHT were among those beaten by Pokpung Eondeok in that race. The former finished a very good 3rd while the latter was further back in 7th but it was only his second start having shown promise on debut. Freedom Knight is by Tiznow and those often go well here. (12) CHEAT KEY rounded off 2020 with a solid 3rd in December and looked well in a trial two weeks ago. The wildcard is (11) TRAFFIC MARINE. He got a dreadful trip last start behind Cheat Key but was absolutely motoring at the finish and may well be worth throwing into the exotics.

Nice race for the level. (8) TOP SKY was a front-running winner of a very similar race on January 8th, beating three of these in the process. He does carry top weight here but there is a reason for that and it's only 1kg more than last time. He has every chance of winning again. (14) WORLD TOP has also had the beating of a few of his rivals here recently. He comes in off a runner-up finish over the distance behind Return Of Subsidy a month ago and should be firmly in the hunt today although he will need to find a prominent position from a shoddy draw. (10) AFLEET YOUNG has won his latest two, both over 1400M, to step up in class and in distance today. He is accordingly nicely weighted and can be competitive at this level. (9) POWER TRAIN, 5th behind Top Sky last start, is still proving himself at this level but is capable of improvement today. The wildcard is (2) DIAMOND MARINE. He hasn't been seen since winning over 1400M at class 4 back in August but the Paynter gelding looked in fine form when winning a trial earlier this month.

(5) HAPPY FEVER has finished in the to5p two a remarkable ten of twelve times so far. He comes in having won a race on December 19th from which six of the top eight finishers appear again. With no weight increase he can win again. (4) YES PERFECT ran 2nd that day and (14) THE SABER was 3rd. Those two look among the most credible challengers to the favourite and at the very least can be aiming to find the places once again. So too can (10) DOCTOR CARSON. He didn't go well in that race but last year's KRA Cup Mile 3rd-placegetter has plenty of class about him and can improve here. (3) THUNDER FLY actually beat Happy Fever when they raced back in October of last year. He hasn't raced since Happy Fever returned the favour a month later but should be in at least the minor money frame here. 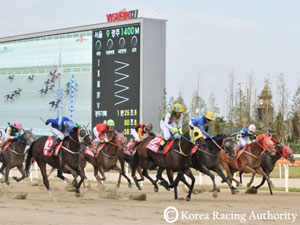