Juvenile maidens get the weekend underway in the capital and five of the eleven are racing for the first time. Much of the experience is promising though, including top pick and probable favourite (3) DUSON FANTASTIC. He finished in the pack on his first start in September, but the performance was good, and he showed solid improvement to then run 2nd on his reappearance on October 16th. He is a front-runner; he draws well here, and he can win. Among those challenging him for the early speed will be (4) RAON THE DASH. After winning a July trial, she has finished 5th in both race starts to date, both in quick times. Look for her to be challenging for better here. (9) COMPLETE LUCKY significantly improved at start number two with an on-pace 3rd a month ago. Expect her to be in this a long way. (1) CHAMP STYLE has run on well in both starts to date and while she may want a little further, she can't be ruled out from the inside gate. As for the first-time starters (2) SMART BYEOL improved across two trials and perhaps has the best chance of making an immediate impact.

Juvenile filly maidens with five of the ten racing for the very first time. It's very hard to go past (6) ICHEON ARCH. Having only just scraped through her trial, she was totally unfancied on debut on October 2nd but ran around in 2nd place the entire way behind a good winner in a fast time. If she runs to anything near that today, then she should win. Frankly it's also hard to look past (7) MAGIC JUDE for 2nd. She's raced twice and finishes 6th twice in fair times for the respective conditions. She draws better today and won't need to improve much to get on the board. Of the first timers, (3) NAOL CHAMP beat a couple of these in an October trial when handy to the lead early and just getting a little tired towards the end. If she's trained on since, then she should have a placing chance first up. (1) WONDERFUL KITTY and (2) GEUMA WITTY others who may have a say.

Fillies only here. The logical pick is (8) GEUMGUKHWA, who seems to be working towards a win especially going on her latest two outings, especially her last start 2nd at this distance when she ran on strong from midfield to be beaten only by a good winner in a decent time. In this company she may well be ridden further forward earlier, and she has solid claims. (9) EAST MAGIC returned from almost eight months off to run an improved 4th over 1200M on October 9th. She should have come on for that run and the additional half-furlong today may well suit. (2) LUCKY CROWN has made all three starts so far at 1000M and at the latest of those was an improved 3rd in a fast time. She draws well to get on the pace here and is firmly in the hunt. (7) ELITE RULES came home 5th behind East Magic at her latest start and should be competitive again here while (5) LAGERTHA is the sole runner to have winning experience. It came at this distance four starts back and while she hasn't done much in her other outings, that alone is another to bring her into the calculations in this kind of race.

Not the greatest of maidens here with none of the fourteen coming in having finished any better than 6th at their respective latest starts. (7) DESK TAP is the one to beat. He enters with the greatest consistency having finished in the top five on five of eight outings so far and can step up to 1300M for the first time with confidence. He has the fastest star in this field and from a decent enough draw and with David Breux taking over in the saddle, he can win. Draw a line through the latest offering from (12) REAL CONCORD when she was hampered early and in general got a bad trip. Instead go on her 2nd place two starts back at this distance as well as her 5th place the time before when she beat a couple of these, and she figures to be the main danger. Get the ruler out again and draw another line through the last showing of (3) MAIN OF KING. He comes back in trip today, draws well and comes down 4kg in the weights with an apprentice up and can go much better. (13) WONDERFUL CAT has the fastest time of any of these at the distance and while it was some time ago, that alone means she shouldn't be completely ruled out in this company. (11) BARAMGWA HAMKKE another with placing chances.

Another maiden where the form going in is distinctly average. That makes (10) SUPER BIRD a standout on the basis of her runner-up finish at her latest start on October 9th when she came from well off the pace to run on strong over 1200. She ran 3rd on her only previous try at this distance and looks to be the one to beat here. (14) K N PARK has only raced the once and should have come on for that 6th place finish over 1200M back in August He draws badly here but looks worthy of consideration in a weak race. (3) GREAT EYE has mixed his form across five starts so far but draws nicely here and should be in the mix. He got way too far back last time but should have an easier run of it here. (12) GABO SARANGHAE has mixed her form but is capable of running good times and along with (1) VIENTO, is another in the placing frame.

(2) RAON CHAMPSELY returned from five months off on October 3rd and looked very much as tough she needed the race, knocking up very quickly and finishing last in a fast race at 1300M. She is way better than that though and should come in today race fit and ready to win from a nice draw. (6) JISANGUN comes up in class after an all the way win over 1200M on October 16th. He had been working up to that win for a while and it was a dominant one in a time faster than any of today's rivals have achieved at the distance so he certainly should measure up class wise. (7) GEUMA FLAWLESS is yet to win in eleven attempts but has been consistently close with six top-three finishes. He generally settles back and runs on and will coming on strong late once more. (3) DREAM PELLA races for the first time since winning over this distance at class 6 level in May. He looked well in a trial three weeks ago and has every chance of going well first-up. (8) WOL YEONG I another in the placing hunt.

(4) JILJU DAERO ran a very strong 2nd to Seungbusa at this class over 1300M on October 3rd when he swept home from off the pace having sat in midfield early. It was a good performance in a fast time and while he comes up a couple of kilos here, he is very much the one to beat. (1) SOARA BABA ran 3rd in the same race, her second consecutive placing finish. She has come from off the pace from both times and from a nice gate and under a light weight can go close again. (3) ROCK FIGHTER enters off a solid 3rd place at class and distance on October 10th when settling in the front of midfield and running on strong. He should be in the mix again from a good barrier. (11) CHEONGSAN GASE came home a slashing 4th at class and distance on October 17th, beating a couple of these in the process. He carries next to nothing on his back again and given his racing style, the wide gate shouldn't be a problem. (2) JOY OF KING was a close 5th in the same race and should be similarly competitive again.

(10) RACE ROYAL was first up after three and a half months off on October 10th at class and distance when she came from the pack to run a good 3rd place with a number of these behind here. She meets that day's winner (12) UNICORN BRAVO better at the weights and if she can avoid her customary bad start, this could be her day. Unicorn Bravo was a good winner that day, racing handy for most of the wat around and then proving too strong. The draw shouldn't be a huge problem, but he does come up a full 4.5kg which brings him back to a few of these. Nevertheless, he still has solid claims to repeat. (3) DOLGYEOK APEURO somehow remains a maiden after twenty-three attempts. She enters in consistent form though and has beaten a number of these in recent outings and looks a good placing chance here. (4) DAEGUN PHOENIX came home 6th behind Unicorn Bravo and Race Royal last month and can get closer here while (9) FEVERDINI is another in the money frame.

(2) MIGHTY BOOM was a fine runner-up at class and distance in a fast race on October 10th with a couple of today's rivals behind here. She draws nicely and comes in at more or less the same weight here and she looks very much the one to beat. (4) JANGSAN GOLD was 4th in that race having settled at the back and still only leading a couple in the straight before running on very well. Expect her to be ridden a bit closer today and she won't be far away. Nor will (9) GLOBAL SINHWA, who has never finished worse tan 3rd in six outings to date. At his latest, he ran 2nd on his first try at this class having been on pace throughout and he should maintain his very consistent record here. (3) SHARK JJANG and (5) PREEMAX, both of whom enter off last start runner-up finishes over 1400M, are others to take into account.

(9) K N WONDERFUL is set to be a warm favourite to snap his streak of three consecutive runner-up finishes and go one better today. He is up in class, but he has been running the kind of times over this distance that should be very competitive at class 4 level and he comes down a full 3kg in the weights. He can sit handy or in midfield and run on and he should be too strong. (7) IL MARE comes in off a decent enough 4th place at class and distance on October 3rd. He doesn't exactly win out of turn but is consistent enough and looks a place hope here. (11) DONGJJOK GLORY ran a class and distance 5th in a fair time at this latest start in arguably tougher company than this and a similar run should see him in the finish. (1) LAST BOSS and (2) JEMA TEUKGEUP are others in the hunt for the places. 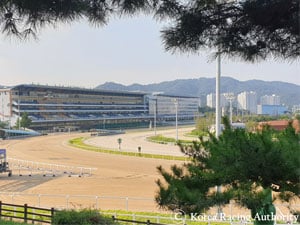