The new year begins with eight three-year-old filly maidens tackling the five-furlongs with four of them racing for the first time. We'll need to draw a line through the latest effort from (4) HANEUL MISO when she was well positioned but offered little in the stretch, and instead go with what we know she is capable of from two starts back when a close 2nd. She draws well and, in this company, has every chance. (2) HWARANG BRAVO has run adequately in two starts so far. She gets a better gate in this small field today and with a top jockey on, should go closer. A couple of the first timers did well enough in their trials. (5) JEONGDEUN-RO broke well and was on pace and while she was passed by a few, she wasn't asked for too much effort and ran on well. (6) HWARANG SKY and (7) KF ONE similarly showed promise.

(6) JUMAL BOBAE has a 4th and a 2nd in two starts so far, the latest of which was at this distance on November 28th when he came from off the pace to run on strong. With some natural improvement and in this modest company, he can go one better today. (1) DAEHO NURI had a poor day at the office at is latest start when slowly away but if we go on his run two starts back when from a good draw, he got on pace and ran on for 5th, he can be considered for a place here. (8) UNJU BULPAE showed improvement at start number three last time out and cam maintain that positive trajectory here, while (10) SEONGSIL CHOEGO can improve on his 6th place on debut over 1000M. Debut-maker (5) I AM CHARTERED performed well enough in a November trial to suggest he can be competitive first-up.

A weak maiden here and it won't take much improvement from any of them to win. We'll take a chance on (2) GOSUUI POWER, who returned from over six months off to run 7th of fourteen when drawn wide over 1200M on December 5th. Before the layoff he had shown ability and should have come on for that run. He has a better draw today and this may suit. (8) SENSATION PARTY was a much-improved 3rd when stepped up to this trip on December 3rd. She led for much of the way around that day and while the time wasn't fast, she looks nicely in here and can go close again. (5) YOUNG BOSS similarly improved at his latest effort in December when 4th at 1300M and from a decent draw can be on pace here and in the hunt. (12) STATICE ran a good 2nd over 1300M on December 12th and after fifteen starts looks close to finally figuring things out. (1) A ONCE another in the frame.

(9) SEONGSIL SONYEO has been knocking at the door for a while. She comes in following a solid 4th place over 1400M and has the fastest time among these at this distance by some margin. Her running style means the draw shouldn't matter and she could well win this. The question is whether after seventeen attempts, there is any improvement there. (7) ADELE STELLA has run 5th in both starts so far over 1000M and 1200M, both times running on well. He looks like he needs a bot of distance and gets a chance to prove it here. (4) HIT RUNNER was an on pace and improved 4th over 1400M at start number three on December 10th. He draws well to lead again and can go close. (10) GRAND CHUKJE and (2) HAEUNDAE BLUE among others in at least the placing frame.

Big and competitive field here. (4) CATCH THE VICTORY returned from four months out to run 2nd at class and distance on December 10th. He comes up a couple of kilos in the weights but draws very well and could be the one to beat here. (1) MIND ZONE pulled off a super gate to wire victory at start number three over 1000M on December 5th. He comes up in class and in trip here but from the inside gate a big performance can't be ruled out again. (14) COLORFUL WIND pretty much made all on debut over 1000M having previously won a trial too. She is the big loser from the draw but if she can find a decent position then she looks to have plenty of potential and should be in the finish again. (9) WONDERFUL JAZZ and the up in class (8) HOT PLAY are among several others with strong placing chances.

Another big field, this time fillies and mares only and it is very competitive. We'll take a chance on (3) BANJIUI GIJEOK. True on her first try at this distance last time she got beaten by three of today's rivals, but she has a runner-up finish to her name at this class and draws much better today. She has chance at potentially good odds. (4) BARAM GONGJU comes in following a 2nd place at class and distance on December 10th which followed another solid showing a month earlier. She can maintain that positive run of form and go close here. (7) CHEONGMA HWANGHU was a much-improved 2nd at class and distance last time out when leading for much of the way around. She comes up in weight but has a top jockey booked and can go close. (11) BEST HAMSEONG was a disappointing 8th on her first go at this class a month ago but she is a winner at the distance and can improve here. (8) BEST WIND is up in class following a good score over 1300M and is one of many with placing claims.

(10) MONGTTANG won back-to-back races in October and November which enabled him to get his chance in the Breeders' Cup race for juveniles on December 5th. He ran very wide on the corner taking himself out of winning contention that day before working home well. He comes up in trip here and it may well suit. (1) ADELE CROWN is rapidly up in class having won his latest two, both at this distance and last time in emphatic fashion. This is a step up in terms of opposition, but he draws nicely to sit handy, and a hat-trick is a possibility. (9) ROCK PEGASUS worked home strongly to run 2nd in a fast race at class and distance on December 3rd. He has mixed his form and comes up significantly in the weights but can be in the finish again. (2) K K WON and (8) GREAT DANCE among others who can enter the calculations.

Great race to end with. (4) COOL GUY is up in class having run 2nd on his first try at this distance on December 17th. The time wasn't that fast, but he previously ran a very quick mile when winning in November and down in the weights today, looks very much in this. (2) YEONGGWANGUICHUKJE has the fastest time among these for the distance and was 2nd last time on December 5th with a few of today's rivals behind him having led for much of the way around. He could go close or one better here. (9) GREAT BOSS was 4th in that December 5th race running on from a wide draw. He draws wide and gives weight away again but should be in the hunt. (10) TOP MATE was an also-ran in that December 5th race but has the potential to go better here. (8) POWER WINDY among others capable of finishing in the money. 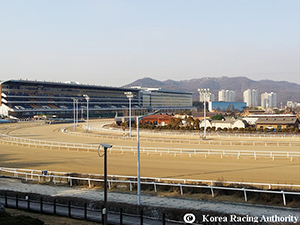