David Archer had already scaled some of racing’s highest peaks with his 10-time Group One winner Mufhasa, but last weekend he was right back at the summit.

“Days like that are what you live for in racing,” Archer said. “All wins are special because they’re so hard to get, but a race like the Doomben 10,000 is on another level.

“The reaction to this one has been amazing. We’ve been inundated with congratulations from so many people. It always amazes me how many wonderful, down-to-earth people we have in this industry.”

Saturday’s triumph was clocked at a sizzling 1:08.97 – the fastest of four runnings since the race was reduced to 1200m.

It was the eighth win from 15 starts for the Tony Pike-trained Bostonian, and the Jimmy Choux gelding is undefeated in four starts in Queensland.

“Tony Pike told me that only three Kiwi horses have won 1200m stakes races in Australia in the last decade, so Saturday’s win really was a remarkable achievement,” Archer said.

“Nature Strip and Osborne Bulls are top-quality sprinters, so we knew they’d be hard to beat. They ran incredibly fast, breaking the race record. We enjoyed the run of the race, thanks to a beautiful ride by Michael Cahill, and our boy did the rest with such a strong finish.

“I was there with Diane (Wright, partner), my son and his partner. Doomben welcomed us with open arms and it was a really great day.”

While those other Archer stars were all Karaka yearling purchases – Mufhasa for $50,000, Gallions Reach for $30,000 and Charles Road for $90,000, Bostonian is different.

“The fact that we bred him ourselves does add something to it,” Archer said. “Being out of a half-sister to Mufhasa makes it quite special as well.

“We entered Bostonian for the Karaka sales as a yearling, but Brent Taylor, who raised him and prepared him for us at Trelawney, just told us he wasn’t quite right in the lead-up to the sale. He said he had buyers all over him, but he wasn’t quite right and we might be better to hold on to him. I remember him telling me, ‘He might be the cheapest good horse you’ve ever owned.’ He was so right, and we’ve been very fortunate with how that turned out.”

Bostonian’s dam, Keepa Cheval, is part of a small but select broodmare band.

“We’re not big-time breeders, but we’re lucky enough to have a couple of very nice mares now,” Archer said. “We also have Seven Schillings, who produced this season’s Group Two winner Emily Margaret. Another of her foals, Heptagon, has won seven in Australia.

“Our racing team isn’t very big either. This year we’ve essentially just had three – Bostonian, Charles Road and Amano. I think Amano might develop into a really nice four-year-old next season.

“But we’ve also got Come In Spinner, who’s a talented horse but has spent about 18 months on the sidelines after fracturing his back. He’s gone over to Queensland and might resume on the Sunshine Coast this weekend.

“We like to buy one or two horses a year to add to our stocks. We bought a couple of nice babies last year who are coming along well, and at Karaka in January this year we were able to pick up a lovely Sacred Falls colt from Waikato Stud and a beautiful Per Incanto from Little Avondale.

“So, from the current level of three or four, we might have a racing team of eight or nine in the not-too-distant future. It’s exciting and we’ve got a lot to look forward to.” 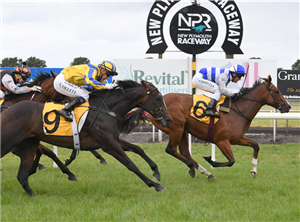