(1) MAJOR PUNCH debuted all the way back last September but had a number of setbacks before finally returning three weeks ago and running 2nd over 1000M. She’s up in trip today and will be one of many looking to get on pace early but she should have too much for this field. (8) TOHAM IMPACT ran 3rd behind Major Punch last time and is set to be a danger again while (4) TIZBE ran well for 4th on debut a month ago, beating a couple of these in the process and can build on it here. (9) TWO TWO SIMON and first-time starter (11) GIJEOGUI JILJU are others who should be in the hunt.

(5) ULTRA POWER is up in class following a two-length score at this distance to secure his maiden win on what was his fourth career start on April 19th. He made all that day and is nicely drawn to get to the lead again with potential for another win. Just shy of a year separated (12) JEONGUIUI GITBAL’s first and second career starts. He came back with a flourish though, registering a five-length victory over this distance on April 12th. He came out of the same wide gate that day and while this is tougher, a repeat isn’t impossible. (2) GAMDONGUI SUNGAN remains a maiden but joins the other two up in class following a couple of near-misses and should be competitive at this level. Of those who have class 5 experience already, (3) YEOWANGUI TANSAENG and (9) NORMAL CLASSIC look the most capable.

Three-year-old maidens here with only five of the fourteen having raced before. Three of those five did reasonably well so we’ll cover them first. (7) YESULUI GYEUNGJI was perhaps the most impressive, running a useful 3rd in a competitive race at this distance on April 19th. HE can have learned from that and can push on here. (10) PAGEUKCHEON too did nothing wrong when 4th on his own debut back in January and while he has had one or two setbacks since, returns here in good shape and can go well. (14) VEGA THUNDER came from off the pace to run 2nd at the beginning of April. She was scratched from a scheduled run two weeks ago when she refused to load into the gate but has since passed her stalls test and if she jumps, she should be close. As for the first-timers, (8) NANSAN YEOJE and (2) PAI BLADE looked best in trials.

(9) YEONGGWANGUI CHEER ran an improved 2nd last start on April 19th (beaten by Ultra Power who we saw in race 1) by two-lengths with a couple of these behind him. Under Kim Yong Geun today, he’ll likely look to get forward early and can go one better. (11) CHANGE BACK was 3rd in that race, three-lengths back and can get closer today although the main danger may ultimately be (2) ZET KING. He was an improved 2nd on April 12th and from gate 2, can sit handy and finish strongly. (1) DYNAMIC BOLT and (3) HAENGBOK KOREA are others who should be in at least the placing frame.

(12) FUSION PARK has been 3rd in both his latest two outings at 1300M and a mile. He was a beaten favourite last time, but Bart Rice’s colt looks worth another chance to get things right today. (14) NAEGA SAEGANGJA is another who has found himself beaten when market leader, but he’s ever been worse than 4th in five outings to date and surely maintains that record today. While the wide draw does him no favours, he has generally run in stiffer company than this and a breakthrough is not impossible. (1) SMART WINNER and (7) USEUNG STORY are both better than their latest respective results suggest and can improve here while (5) LEGACY is the wildcard. His solitary start was more than a year ago, but he looked handy enough when trialling up in April and the jockey/trainer combination will tempt some.

(9) JOY OF LUCK was last seen running 8th in the KRA Cup Mile, the first leg of the Triple Crown. Neither company nor distance seemed to suit that day but back in class 4 and back at 1300M, he should be far happier and looks the one to beat. (10) OCEAN PHOENIX had a poor day at the office last start but was going well prior to that and should be better today while by contrast (1) BAENGNYEON SIDAE was a good winner at this class over 1200M on April 21st. He carries an additional 3kg this time but remains firmly in the hunt. (4) TIME SPEC and (7) OS HILL are other contenders in what’s a good race.

After winning on debut, (9) SSONSAL has followed up with a 4th and 5th, the latter in a competitive Trophy race last month where, with a bit more luck, he might have finished 3rd. He can come from off the pace here and could return to the winner’s circle. (11) NAKITA won two of her first three in fine style before having a couple of setbacks. She weakened on her return to action at the end of March but after a further seven weeks out, could be much better today. (6) MAJOR ANGEL is already a class and distance winner and is well drawn to be on pace here with solid claims to go all the way. (2) MR. KOREA and (4) TAP SOCKS both come in off runner-up finishes on their respective latest starts and both can be dangerous in this company.

(9) PRO CONSUL has won both his starts this year, the latter a four-length score in a valuable Trophy race. He steps up to two-turns for the first time today but looks a very solid prospect and is favoured to keep his 100% record for 2019 intact. (2) MUHAN YEOLJEONG was a very good 2nd at this class over 2000M three weeks ago and looks nicely in to go well again here. (6) ACEUI SEONMUL beat a couple of these on his way to 2nd place at class and distance on April 19th and can aim for a repeat under a similarly light weight today while (5) HIDDDEN CHAMP is already a class and distance winner and should be in the hunt as well. (4) THE GRAND, 5th behind Aceui Seonmul last start, looks best of the rest.

(3) SINHYEOKMYEONG returned from ten months off to run 3rd, beating four of these in the process, on April 21st over 1200M. He was quite slow to begin that day and with a better start, could well be the one to beat here. Of those behind him that day, (2) EUNGNIBYEOSU, who has raced once since and performed much better, and (4) UJU DAEWANG are probably best placed to get closer today but bigger challenges are likely to come from elsewhere. (8) MAPLE CLASSIC won a very tough race at class and distance on March 29th and then came 4th carrying today’s weight in another stiff test four weeks ago. He can settle in the middle of the pack and finish strongly. (6) PRIME RACE is a touch inconsistent but the drop back in trip today may benefit and he is another who can get close. 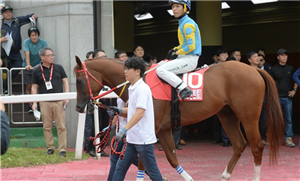