Triple threat for Sharrock in 3YO feature

New Plymouth trainer Allan Sharrock will have a strong hand at his local meeting on Saturday, led by a trio of fillies in the Seaton Park 3YO (1400m).

Akerra is proving an exciting prospect, having won on debut at Awapuni in May and stormed home late to finish runner-up over 1200m at the same track earlier this month, beating stablemate London Express into third.

Sharrock has been pleased with her progress since then and he believes her wide barrier of seven will be ideal on the Heavy11 track.

"She has worked really well in blinkers and she will run out a strong 1400m," he said.

"She has done everything terrific since her last start, I am really happy with her.

"I have never seen it wetter here, so the wider out you are the better you will be.

"She is a nicely bred filly, she is bred on the same cross as Shez Sinsational. I think she is going to be a filly that goes up a level."

While Sharrock is expecting a strong showing from Akerra, he believes Ocean Park filly Penelope Cruise is the one to watch heading into the race.

"She is  a very good filly," he said. "She is crying out for 1400m. I ran her over 1200m to fitten her up for this race (last start when finishing fourth) and she hit the line really strongly."

Sharrock's other runner in the race is stakes winner London Express , however, the daughter of Shamexpress is a dual acceptor and could potentially start in the Revital Fertilisers 1400.

"I haven't made a decision on her as to whether she runs in the three-year-old or the other field, which lacks a bit of depth," he said.

"I am still leaning towards the three-year-old race, at this stage, because they are all babies."

While beaten into third by stablemate Akerra last start, Sharrock wasn't disappointed with London Express' run and thinks she has taken a lot of improvement from it.

"She is probably the one who has progressed more out of her last start than Akerra," he said. "She hadn't raced for a while, so I expect her to be at concert pitch on Saturday.

"I thought she would win (last start), but it didn't disappoint me. She overraced, they dropped anchor in front and she got pulling at the back.

"She then had to work around the field, she looked beaten on the corner, but she has only been beaten 0.9 (lengths) and was probably doing her best work at the finish as well.

Sharrock will also have a number of other chances at his home meeting on Saturday, with Mars Bars, Come Sei, Foiling and Beckidboo all pleasing him in the lead-up to Saturday.

"Beckidboo was really impressive winning her maiden (over 1200m last start)," he said. "She has trained on beautifully and 1400m will be right up her alley, and a wet track, she is one of my stronger chances.

"Come Sei, he has done nothing but impress me since he last raced (winning on debut at New Plymputh). He will eat up the 1800m and will be very hard to beat.

"Foiling is dropping back from (rating) 72 to 65 and the last two runs have been quite good, even her sixth last start, she made a lot of ground, so 1800m should be better than a mile for her. 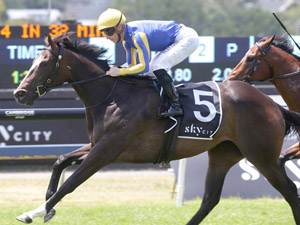