Cox hoping Tis can be Marvellous on Town Moor

Sprinter was unlucky in Beverley Bullet

Clive Cox's Tis Marvellous  is looking to bounce back from a luckless run in the Beverley Bullet as he targets the DC Training And Development Services Scarbrough Stakes at Doncaster on Wednesday.

Coming home fifth of 10 despite heading to post as the 2-1 favourite, the five-year-old had travelled to Beverley off the back of a lucrative success in a five-furlong heritage handicap at Ascot, having previously finished second in the Wokingham at the Royal meeting.

"He won very well at Ascot, then didn't get the easiest of passages in the Beverley Bullet," said Cox.

"He's come back in great form, he's had a good season so hopefully this can be a good opportunity for him."

El Astronaute, trained by John Quinn, will step back down to Listed company as he attempts to claim the race he lost by just a head last year.

The six-year-old was narrowly beaten by Global Applause in last season's contest and has since competed in Group-race company with varied success.

After successive wins in the Listed Midsummer Sprint at Cork and the Rockingham Handicap at the Curragh, the son of Approve then finished second in the Group Two Sapphire Stakes at the latter track.

During that spell of good form he outperformed three of his Scarbrough rivals – Duke Of Firenze, Dark Shot and Equilateral.

"We're very happy with him and he really likes Doncaster," said Quinn.

"He ran very well in the race last year. Tis Marvellous will be the one they've got to beat, his form is very good."

Equilateral has not been seen since his encounter with El Astronaute at the Curragh, where he finished three and a half lengths behind John Quinn's gelding and seven lengths behind the winner.

The four-year-old colt was previously second to Mabs Cross in the Group Three Palace House Stakes at Newmarket, losing out by a mere neck.

Speaking of his Scarbrough entry, trainer Charlie Hills said: "It's the race we've been waiting for.

"Obviously he's won at the track before, it's a race he should be running very well in."

Elsewhere in the line-up is the Michael Dods-trained Queens Gift, second to Judicial in the Beverley Bullet and a two-time winner over five furlongs this season.

Scott Dixon's Dark Shot, David Griffiths' Duke Of Firenze and James Fanshawe's Archer's Dream are also in the mix, with the latter looking to return to form after his three-race winning streak came to an end when ninth in the Group Three Summer Stakes at York. 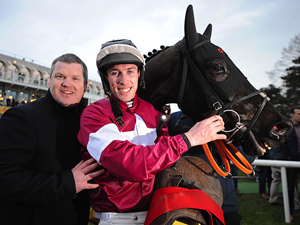