The Shaune Rtichie-trained filly shed the tag of New Zealand's best maiden when winning the Gr.2 Eight Carat Classic (1600m) last start in the hands of James McDonald, having previously been placed in the Gr.1 New Zealand 1000 Guineas (1600m) behind race rival Loire.

Sam Weatherley will be back in the saddle after missing the Eight Carat through suspension and will have a task ahead of him after drawing the outside gate (16).

"We have had a laundry list of wide draws for most of this prep, James (McDonald) is the only one who managed to get a good marble with her," Ritchie said.

"You have to look at these things positively and the one good part about her is by riding her cold, which is what we will be forced to do, she is learning to relax at the back of the field and get to the line and that will augur well for her in the future when stepping up to 2000m.

"She does have a very good turn of foot so she will make a hell of a lot of ground up in the straight.

"A big field will make it a bit tougher though."

Ritchie received positive feedback from James McDonald after the daughter of Rip Van Winkle saluted on Boxing Day, with the champion hoop suggesting Jennifer Eccles would be up to the mark across the Tasman.

"There is not much between these fillies. You have got Two Illicit, Loire and Travelling Light and they have been racing together a while and there is probably a length between them at their best.

"James got off and said Jennifer Eccles would measure up in Sydney because she has got a very good turn of foot so it's looking pretty positive for all four of us for that matter.

"He said she has that great turn of foot which can get you out of trouble if you get out late. Like James, I'm not convinced she will get a mile and a half but what else is there unless you go to Australia.

"We do hold a narrow lead in the Filly of the Year series and to win that amongst what appears to be a stellar bunch of fillies would be quite an honour."

Ritchie has already mapped out the filly's next few starts, with securing maximum Filly of the Year series points a focus.

"She will almost certainly be going to Te Rapa (Gr.2 Fillies Classic) which is a soft 2000m and then to Hastings (Gr.2 Lowland Stakes, 2100m) which is another soft track rather than head to Ellerslie (for the Gr.3 Sunline Vase, 2100m).

"We are not hell bent on it but obviously it is somewhat of a focus to try and get the award and if that is the case you will need a very big podium for all the owners in the horse."

Jennifer Eccles , who is raced by the Challenge No.10 Syndicate, was purchased by Adrian Clark for just $5,000 as a weanling at Karaka and has a massive contingent of owners.

"Adrian does a great job of liaising with the owners which leaves us alone to get on with the horse," Ritchie said.

"We trained for Challenge relatively early on. The first one wasn't much good but I think we got just as much respect for sacking it early and not persevering with it to stop the costs quickly.

"With the racing manager-trainer relationship you have to have a rapport and Adrian has been around the game a long time and understands the right races and the horses so it makes things a lot easier."

Ritchie will also have a dual-pronged attack on the Gr.3 NZ Campus Of Innovation & Sport Wellington Cup (3200m) with The Good Fight ($6) and Excalibur ($41) to represent the stable in Saturday's two-mile feature.

"Excalibur was favourite for the race last year and ran tenth and I was a bit disappointed. I didn't feel he came up last year, he never won a race and was just racing two lengths below his best," Ritchie said.

"Sometimes when those horses have a good season they have a miss year and I think that is what happened to him getting up in the grades and getting to the open handicap without that turn of foot that one or two others had.

"He has come up better this season and he is dropping from 60kgs to 54.5kgs and stepping up over distance and those things, I believe, will help him be an each-way chance in the race.

"The Good Fight came back from a Melbourne campaign where he ran behind the likes of Surprise Baby. His first up run was a pipe-opener and he ran the mile and a half of the City Of Auckland Cup like he was looking for two miles.

"His improvement from his last run to this run has been remarkable. I think he is weighted to win and has the turn of foot to do it. I am convinced he has been looking for the two miles he just wasn't good enough for other two-mile races.

"This handicap is more suitable than the Auckland Cup (Gr.1, 3200m) for the obvious reason that it is not set weights and penalties. He gets in very well in the handicap, for him to be a kilo off the minimum he will run a race." 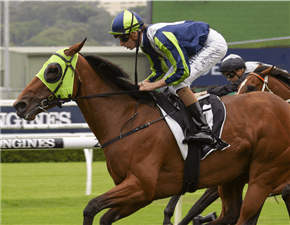