Tavistock gelding Stockman continued to show his progressive talents at Randwick on Saturday when taking out his 2000m event, and trainer Joseph Pride is now eyeing some loftier targets for his charge.

It was his third victory this preparation from just four starts, ranging from 1300m to 2000m, and Pride has been impressed with the promise shown by the three-year-old.

"They are promising signs when they're able to win a 1300m race first-up and three out of the first four runs of the preparation, you know they're headed in the right direction," Pride said.

"We will find out what his best distance is along the way but I wouldn't be surprised if he could run 2400m. He might even be able to run two miles. It is a pretty stout pedigree."

Pride said he was fascinated by Stockman 's breeding, being out of an older mare, and a family he is familiar with.

By a quirk of breeding, three-year-old gelding Stockman is actually the uncle of Pride's 19-win warhorse Destiny's Kiss, who retired at the age of 11 this year.

"We don't usually talk about horses in those terms, but if they were humans, Stockman would be Destiny's Kiss' uncle," Pride said.

"Stockman is out of a pretty old mare. He was the last foal of Crimson, who was in her twenties and she was out of an old mare as well.

"It is not a fashionable thing to be breeding out of old mares and statistically it doesn't measure up that well, but that said there are a few other factors in that as well, because those old mares don't always get their chance as the young ones do."

Pride said there are a few options ahead for Stockman, including a potential interstate trip to Queensland.

"He might go to the paddock yet but he looks like he is in good order," Pride said. "He is a tough horse that has copped those last two runs with nine-day turnarounds both times.

"There are a couple of options there. There is the paddock. There is a Warwick Farm public holiday meeting on a Monday in a couple of weeks time, a 2100m on for him that day, or we could take him to Brisbane and run him in the Rough Habit (Gr.3, 2000m).

"There is no Queensland Derby (Gr.1, 2400m) for him but there are quite a few options there.

"The horse will tell us and over the next week or so we will just monitor him and see what he is up for." 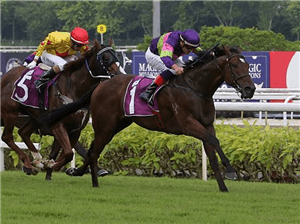