Go Racing double up at Tauranga

Trainer Stephen McKee brought up a winning double for syndicators Go Racing at Tauranga on Wednesday with Lord Ardmore and Savappiel.

Three-year-old colt Lord Ardmore was having this third career start after placing at Tauranga last month.

Under a positive ride from Sam Spratt, Lord Ardmore travelled in a handy position for the trip before letting down in the straight to win by a neck from consistent mare Always Sacred, who is yet to run out of the money in each of her five starts.

McKee said the son of Reliable Man benefited from a step up in distance and he was pleased with the effort.

"It was good to see him progress from his first up run," McKee said. "I thought he was unlucky not to run second last start.

"The step up to 1400m helped and he finished strongly against some older horses."

Lord Ardmore holds a nomination for the Gr.1 Al Basti Equiworld Dubai 48th New Zealand 2000 Guineas (1600m) though a trip south is yet to be confirmed.

"We are undecided at this stage," McKee said. "There are a few options and if he doesn't head to Riccarton then there is no need to rush him."

McKee, who trains out of his Ardmore property, is taking no credit for the promising colt's name though he said he might change his mind if the colt continues to impress.

"I don't think he is named after me but if he keeps winning I might have to say he is," McKee said.

Later in the day Savappiel delivered a brave effort to win the Tauranga Event Centre Venue Hire 1600 under a front-running Sam Spratt ride.

Despite being challenged in the straight, the daughter of Savabeel went on to win by a long head to clear maiden ranks in style.

"She was good," McKee said. "She had a bit of space between her runs because of track conditions and it was a good progression.

"It wasn't the plan to lead but she did well and was challenged down the straight and finished strongly.

"We don't have any set plans for her but she will probably stay in rating 65 company in a few weeks' time."

A stable shift for promising jumper

Hawke's Bay Hurdle (3100m) winner The Midnight Shift will do his future racing in Australia.

The Paul Mirabelli-trained gelding has been sold to Australian interests after his 5-1/2 length win in the jumping feature last month and will join Clayton Douglas' Sale barn.

It was just the second jumping victory for the son of He's Remarkable and Mirabelli said he was more hopeful than confident heading into the race.

"I went there with a very open mind," Mirabelli said. "He had only won the maiden (hurdle) the weekend before and we went down there just to see how he measured up to the other horses.

"I knew he was really well because his work during the week had been excellent. I wasn't confident, but I was hopeful, and it was an awesome result."

With The Midnight Shift's imminent departure, Mirabelli is looking forward to working with a number of juveniles in his Cambridge barn.

"I have got quite a few two-year-olds that are coming up, which are quite exciting," he said.

"Hopefully they can transfer that over to trials and raceday."

Track conditions at Hastings are currently rated a Slow8 ahead of the final day of the Hawke's Bay Spring Carnival on Saturday, where the feature race is the Gr.1 Livamol Classic (2040m).

The rain this week was welcomed by farmers but rued by Hawke's Bay track manager Richard Fenwick as he prepares the course for the 10 race card.

"We had 10.5mls on Tuesday and then we had 14mls on Wednesday night," Fenwick said. "It has helped the farmers out but hasn't helped me out.

"They are talking rain or showers up until Friday morning, which isn't ideal. It is meant to fine up tomorrow and then on Saturday."

With low temperatures predicted Fenwick isn't confident of significant improvement in track conditions but said moving the rail out will provide the best surface possible.

"At best I am thinking it will be rated a Slow7," he said. "The problem is it is 12 degrees today and 14 tomorrow, it is quite cold.

"There was a bit of wear and tear after the second day so we pulled the rail out three metres.

"Around the 600 bend there is not a hoofprint out at the three metre mark, so it is basically  a new track. It should be ideal."

The New Zealand-bred rolled forward under the Mauritian ace from the wide draw but was caught three-wide early on. Teetan kept his cool and chose to roll forward and take the lead at the 650m mark and was involved in a battle to the line with his mount prevailing by a neck.

"I came out and I didn't want to lead and I was forced to keep moving but I think it worked out well. When those horses came to challenge me, he kicked well," Teetan said.

The four-year-old son of Per Incanto takes his record to two wins from 13 starts in Hong Kong, both wins coming at the city circuit under Teetan.

"He was drawn in gate 11, we tried to push forward but the young apprentice just kept him wide," Ferraris said. "He had no choice but to go forward otherwise he would have been three-deep. It was the right choice in hindsight - the best choice and he won a very good race.

The filly has suffered a setback that will require minor surgery and rehabilitation will rule her out of the feature event for three year old fillies, for which she was $5.50 favourite.

A classy last start winner of the Gr.3 Hawke's Bay Breeders' Gold Trail Stakes (1200m) on the first day of the Hastings Spring Carnival, Miss Aotearoa has won both of her starts as a three year old for breeder Tony Rider. 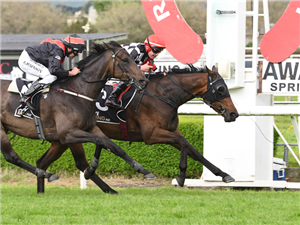