Supera out of Livamol; Spratt sidelined; Weight the only concern for Kiwi mare; Weight relief for Sheezallmine; NZB Ready To Run breeze-ups online

Group One performer Supera won't take her place in the Gr.1 Livamol Classic (2040m) after being scratched on Friday morning as a result of a minor foot issue.

"The track or draw had nothing to do with the decision to scratch her, it's just a minor foot issue," said Ken Kelso, who trains in partnership with his wife Bev.

The Sir Peter Vela-owned mare finished runner-up in the Gr.1 Tarzino Trophy (1400m) at Hastings in the first leg of the Hawke's Bay Triple Crown before finishing sixth in the Gr.1 Windsor Park Plate (1600m) earlier this month.

Kelso is unsure what his next steps are with the six-year-old and said he will play it by ear.

"I'm not sure at this stage, it depends on the foot."

Jockey Sam Spratt has a suspected broken collarbone sustained at the Avondale trials on Thursday.

The 35-year-old, who has ridden nine winners so far this season and has 905 career wins to her name, including 17 at Group One level, will be side-lined in the near future and forgoes her six rides at Ellerslie on Saturday.

Weight the only concern for Kiwi mare

Verry Elleegant's camp couldn't be any happier with the multiple Group One winner heading into the Gr.1 Caulfield Cup (2400m) this weekend.

The Chris Waller-trained mare has won two of her three starts this preparation, including the Gr.1 Winx Stakes (1400m) first-up and the Gr.1 Turnbull Stakes (2000m) last start.

The daughter of Zed will jump from barrier eight on Saturday, but her connections are slightly concerned about their star mare being lumbered with 55kg.

"Everything is going according to plan," former trainer and part-owner Nick Bishara said. "Her work has been great and Mark Zahra (jockey) said he wouldn't swap her for another ride.

"But he (Chris Waller) is very concerned about the weight. I thought she might have just got 54kg, but she has got a good horses weight.

"I think the only other mare to win with a weight like that was Makybe Diva, so it's a big ask."

There is rain forecast in the lead-up to the race, which Bishara said will suit the Kiwi-bred mare down to the ground.

"There is a bit of rain around and that is just going to enhance her chances," he said.

With COVID-19 enforced travel restrictions in place, Bishara said a lot of her New Zealand-based owners will be taking in the big race from the comfort of their homes.

"All the original owners, we are quite close, and they all still race horses with me, not the caliber of her though unfortunately," he said.

"I will just watch the race at home with family and a couple of friends."

Sheezallmine will be vying to add another Group Three victory to her resume when she lines-up in the Red Badge Spring Sprint (1400m) at Hastings on Saturday.

The Daniel Miller-trained mare finished fifth first-up under 62kg at Hastings last start and Miller said She will appreciate the 9kg weight relief this weekend.

"It's (53kg) going to be a big help after having to lug around 62 kilos last start," Miller said.

"I thought she went a good race, she was held up for quite a while at the top of the straight and she was quite strong through the line and after the line.

"I am really surprised with how that first run has brought her on. She has really got that spring back in her step now and it looks like she is ready to go."

Miller believes she will also appreciate the step-up to 1400m and he has been pleased with her work in the lead-up to the race.

"I think stepping up to 1400m, she is probably looking for that now," he said. "Her work has been good, so I expect her to go a nice race."

Sheezallmine's spring plans are still up in the air, but Miller said he will get a better idea after Saturday's assignment.

"I am playing it by ear at the moment to see whether she will get up over 1400m and possibly further," he said.

"A lot of it is going to depend on how she goes in Saturday."

With significant importance placed on Breeze Up footage for buyers this year due to COVID-19 travel restrictions, NZB made the decision to lengthen their traditional Breeze Up clip format and offer vision of the mounting yard prior to horses breezing.

The 2020 Breeze Up clips were extended to include additional footage near the 600m mark to capture horses before they fully extended into their gallop, while horses also had the last 200m of their work individually timed.

While the official Breeze-up videos themselves are slightly longer, NZB also filmed the majority of the two-year-olds being paraded in the mounting yard at Te Rapa prior to their gallop.

Bloodstock Sales Manager Danny Rolston acknowledged the high standard of quality and presentation that buyers have become accustomed to at the Karaka Ready to Run Sale.

"The results of the sale speak for themselves and after seeing the group of horses parade and breeze up this week, it's clear that is set to continue long into the future," Rolston said.

All Breeze Up videos are now available to view online at www.nzb.co.nz 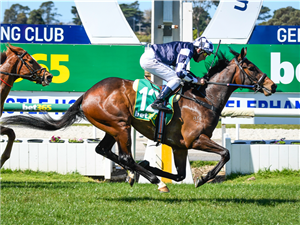