Quality mare Probabeel will be coming home to New Zealand to take a well-earned break in some lush New Zealand pasture after a gritty effort in Saturday’s Gr.1 Cox Plate (2040m).

The Savabeel four-year-old's Cox Plate bid was ultimately undone by the fickle Melbourne weather that saw the Moonee Valley track rated a Soft 7 on the day after heavy overnight rain.

Ridden close to the pace off an inside barrier draw, Probabeel  struggled to make ground in the final 400m on the testing surface, eventually finishing a meritorious seventh behind eventual winner Sir Dragonet.

"She's pretty tired and knows she has had a hard run," trainer Jamie Richards said.

"We'll take it easy with her now and she will come back to New Zealand for a break and then we'll get her ready from here for an autumn campaign in Sydney."

Richards is eagerly anticipating the mare's return as he hasn't seen her in the flesh for well over eight months due to the COVID-19 travel restrictions that have been in place since March.

"I'm very pleased she's coming home as I haven't seen her for so long," he said.

"We were very proud of her on Saturday and I think she represented New Zealand with distinction.

"The race went to plan from the draw, we rode a positive race but she just found the going too tough and wasn't able to hold in there the last bit.

"I would say we won't run her over that sort of trip on bad ground again as she needs the firm footing to be effective over more distance."

While Probabeel couldn't add another Group One to her record for Richards and her owners, Cambridge Stud couple Brendan and Jo Lindsay, the combination were to the fore at Trentham on Sunday with Redoute's Choice four-year-old mare Silver Lake banking her first win with an impressive display over 1200m.

"She was very good and the key to her is possibly racing left-handed," Richards said.

"We'd waited for the right race. She drew wide so we scratched on Matamata Cup Day (10 Oct.) and the next meeting had a wet track.

"Although it was a long way to go for a maiden race, it did look a nice option for her.

"She has plenty of ability and it's just up to her to keep producing it on race day. It was a satisfying win and good to get another for Brendan & Jo (Lindsay), who are great supporters."

Richards picked up a double on the day to take his season's tally to fourty wins and over $1 million in prizemoney to date. The victory of Need I Say More in the Gr.2 James and Annie Sarten Memorial Stakes (1400m) at Te Rapa on Saturday also brought up his 500th victory as a trainer.

"Long may it continue," he said.

"We're travelling pretty well with some lovely horses around us in the stable and there is plenty to look forward to.

"We will have a nice team down at Riccarton for Cup Week there so hopefully we can go well down there." 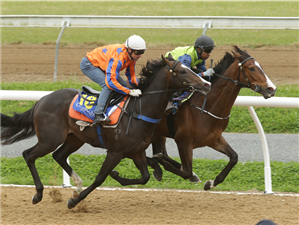