Cambridge trainer Tony Pike was savouring the last few hours of a brief Queenstown getaway on Wednesday before the focus switches to overseeing his team for a busy spring.

When the nominations closed for several of the features across the Tasman, the Pike-trained Sherwood Forest  was amongst those in the long list of Gr.1 Melbourne Cup (3200m) hopefuls.

Last year's Gr.1 New Zealand Derby (2400m) winner will step out at the Cambridge trials on Thursday as he builds towards an Australian campaign.

"There are numerous options in Australia for him. We've pretty much decided when we are going to go over is going to be the key. Nothing is set in stone yet, we have three or four plans we can go through depending on what level he gets to over there," Pike said.

One race the son of Fastnet Rock won't be contesting is the Gr.1 Caulfield Cup (2400m), with Pike electing not to nominate for the A$5 million handicap.

"Probably 2400m around Caulfield wouldn't be his go and there are a heap of other nice races to try and qualify him for if he is good enough," he said.

"If we don't think he is up to Melbourne Cup class there are still plenty of nice options for a lot of money over there that are a tier down."

With several of the leading European stables, including Aidan O'Brien and Charlie Appleby, not nominating horses for the Melbourne Cup this year, Pike senses greater opportunity.

"It is probably the one year that horses that wouldn't usually get a start will get a chance to get a run," he said.

"We are happy with how he has come up this prep, he hasn't had any hiccups like he had last preparation.

"What level he gets to over there will be interesting. If he gets back to his best and improves that little bit, there's no reason he can't sneak into the field."

"We had a chat after Brisbane and he was going to spell in Sydney. Obviously getting ready for those early races over there he didn't come back to New Zealand," Pike said.

"We decided to send him to Mike to get him ready for the spring down there."

Pike indicated that the majority of his better three-year-olds would likely remain in New Zealand through the spring, with stakes-winning gelding Tutukaka the exception.

The Gr.1 VRC Derby (2500m) is the main goal for the son of Tavistock, with Pike likely to give COVID-affected Sydney a wide-berth and therefore skip options like the Gr.1 Spring Champion Stakes (2000m) in preference to a Melbourne focus.

"We had a couple of programmes running through Sydney but there are a lot of nice lead-up races for staying three-year-olds.

"Three weeks later there is an 1800m three-year-old race at Flemington."

Pike will have a pair of runners at Ruakaka on Saturday, headed by progressive stayer Makzabeel in the Aug 21 - Alibaba's Flying Carpets Ruakaka Cup (2100m)

"He seems to love that Ruakaka track and is very progressive. He drops a huge amount of weight. He dropped back to the mile at Te Rapa with the Winter Cup (Gr.3, 1600m) in mind but with the transport difficulties in getting down there with no planes on this year, we decided to pull the pin on the Winter Cup, especially with the uncertainty around the track as well," Pike said.

"It's his first start in open company but he drops a lot in weight. He is the sort of horse that might find a nice early Cups race at a light weight before he heads for a spell over the rest of the summer."

Pike's other runner Always Sacred is first-up over 1400m after recovering from a fetlock chip injury and is likely to need the run.

Meanwhile, the Cambridge horseman, who is also the President of the Trainers' Association, will have as many as 20 horses trial on the synthetic track on Thursday, but is acutely aware of the lack of turf track trial options in the early spring.

"They are only going out for a canter around tomorrow and we will take the safe option and trial them at Cambridge," Pike said.

"The lack of turf track trial options is not a new issue. It has been a familiar issue right through the spring over the last few years, just purely the lack of available track options at this time of the year due to the weather conditions in New Zealand.

"It was a real shame Taupo couldn't go ahead (was originally planned this week). It would have been a pretty solid day of trials.

"It is an issue going forward but on the flip side at least we now have a safe and consistent alternative surface.

"But from a trainer's point of view, and as someone who trains on the Cambridge track, it is always nice to put them on a truck and give them a trip away outside the local area." 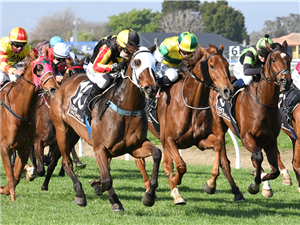