Mapperley Stud has announced their exciting young stallion Contributer is fully booked for the 2021 breeding season.

Following a satisfying year on the track and success in the sales ring, his service fee was increased from $10,000+GST to $22,000+GST this year.

His progeny's success was headlined by Lion's Roar, who won the Gr.1 Randwick Guineas (1600m) and placed in the Gr.1 Australian Derby (2400m) over the Sydney Autumn Carnival.

Llanacord was another exciting talent to emerge from his first crop, winning the Gr.2 Lowland Stakes (2100m) at Hastings and subsequently placed in the Gr.1 New Zealand Oaks (2400m) and Gr.3 South Australia Fillies Classic (2500m).

Earlier in the year, Contributer enjoyed success in the sales ring, with his latest crop of yearlings achieving a 100 percent clearance rate across all sales in Australasia.

"We have received an overwhelming amount of interest in him early on in the year, he's had fantastic results on the track this year and it is easy to see why breeders are keen to get into him this season," Mapperley Stud principal Simms Davison said.

"Lion's Roar's win in the Randwick Guineas was huge for him, getting a first crop Group One winner over a mile during one of their major carnivals really put him on the map.

"Speaking to the Australian trainers, they rate him very highly and we expect that they will be in the market for them at the yearling sales.

"He's got a lovely book of mares coming to him this season, and with his second crop already showing promise as two-year-olds, the future looks bright for him." 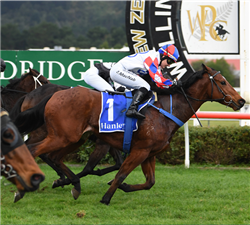