Golden Sixty 's rehearsal for next month's Gr.1 Hong Kong Mile (1600m) went according to plan on Sunday at Sha Tin as he brushed aside six rivals to claim the Gr.2 BOCHK Jockey Club Mile (1600m).

The reigning Hong Kong Horse of the Year extended his winning streak to 15 with a sublime last-to-first effort under jockey Vincent Ho.

Last defeated in July of 2019, the brilliant son of Medaglia d'Oro looked in fine fettle as he launched from his customary position to score by a length, clocking 1m 34.55s ahead of the dual Group One winner Waikuku and last season's Hong Kong Derby (2000m) hero Sky Darci.

Ho was pleased with his mount's first-up performance following three trials in preparation for his seasonal return.

"He definitely wasn't at his best today and we're still building him up. After this race he should be pretty close to his top form," Ho said. "We'll see how he pulls up and do some recovery work on him and get him ready for the Internationals."

Sunday's victory takes Golden Sixty to a record-equalling 18 career wins in Hong Kong, alongside only Beauty Generation and Silent Witness, while his sequence of 15 successive victories has him just two shy of Silent Witness' record-setting 17 in a row.

Trainer Francis Lui was equally as pleased with his star galloper's effort.

"I must say we were confident in this race but I'm happy to see him win again. This horse has got a very good fighting heart and once he relaxes he has a very good turn of foot," Lui said.

Golden Sixty was purchased by his trainer out of Riversley Park's 2017 New Zealand Bloodstock Ready to Run Sale draft for $300,000.

The El Roca gelding was heavily backed late despite Lui's concerns over the five-year-old jumping from the outside gate in a field of 10 and duly justified the support, triumphing by three quarters of a length.

"Honestly, I couldn't say I was confident when I looked at the draw because I was concerned with the draw but he (Chau) rode him very well. I told him to study how Zac rode him last start. The pace was good and the horse has improved," Lui said.

"Jerry did a great job and the horse is going very well."

Chau was also rapt with the victory, highlighting it as his pinnacle achievement.

"It's my best win in Hong Kong. We were lucky, they went fast early and I had a chance to get in and get cover," Chau said.

"It's very exciting. I've won on this horse before but last start Mr Lui gave Zac the horse to ride and he won the race and I was a bit disappointed.

"I didn't think I would get the chance to ride him again. But luckily Zac chose (Naboo Attack) and Mr Lui gave me the opportunity again. Big thanks to him and the owner. It's meaningful – I'll need to have a big celebration.

"I've only just finished my apprenticeship and I'm getting some nice opportunities and I'm trying to ride them to the best of my ability."

Lui indicated Purton, who leads the Hong Kong jockeys' championship, would be offered the ride on Lucky Patch in the Hong Kong Sprint on 12 December.

Reliable Team has enhanced his Gr.1 Hong Kong Vase (2400m) claims with a characteristically defiant effort to land the Gr.2 BOCHK Jockey Club Cup (2000m) under a superb ride from Derek Leung for Frankie Lor at Sha Tin on Sunday.

Leung secured victory by stacking up the field before dashing over the last 400m in 21.81s, rendering hopeless any effort from back-markers to reel Reliable Team in.

"We were always trying to get him to lead in the race and he got a bit lucky, there was no pressure on us to go too quick," Leung said. "So, the horse was quite relaxed and he's very fit.

"Step by step, we built the speed up. He responded very well and I think we were very lucky.

"The other horses didn't give us any pressure, so we saved some strength for the last quarter (400m). I think 2400 (metres) will be even better for him," Leung said.

Lor was also surprised no other horses pressured Reliable Team.

"Ka Ying Star jumped a bit slow so my horse was on his own and could relax a bit through the race," Lor said.

Lor said while he had entered Reliable Team for both the Gr.1 Hong Kong Cup (2000m) and Vase (2400m), he has a preference for the longer trip.

"I enter him both, but I think 2400m should be better for him," Lor said. "We need to keep the horse in good form and then we'll see."

Reliable Team was purchased out of Phoenix Park's 2017 New Zealand Bloodstock Ready to Run Sale draft for $430,000 by Upper Bloodstock.

Dual Gr.1 Auckland Cup (3200m) placegetter Sound will be looking for back-to-back wins in the Gr.2 Zipping Classic when he contests the 2400m Caulfield feature on Saturday.

The Michael Moroney-trained entire heads into the weekend in good form, having placed in the Gr.2 Moonee Valley Gold Cup (2500m) last month before finishing runner-up in the Gr.3 Queen Elizabeth Stakes (2600m) at Flemington.

"He was a pretty hard-going horse when we first got him, I'd say it took 12 to 18 months for him to acclimatise to our style of racing as he was just over-racing.

"I remember I put Jordan (Childs, jockey) on him in the 2018 Caulfield Cup and he said 'I just couldn't stop him', he had the head in the air and kept going. It was exactly the same in the Melbourne Cup.

"It took us a while to come off the bit and relax, we put a norton bit and quite strong gear on him to stop him."

Sound, a winner of eight of 44 starts and A$1.3 million in prizemoney, will be ridden by Jamie Mott in the Zipping Classic.

The long-range target for Sound is the Gr.2 Barfoot & Thompson Auckland Cup (3200m) after which he will retire to stud in New Zealand.

With Auckland border restrictions set to continue until December 15, racing in the region has responded accordingly.

The meeting set to take place at Ellerslie on December 4 has been transferred to Matamata, while the twilight meeting on December 9 has been cancelled.

As a result, the Tauranga meeting on December 10 will now be run for feature stake money.

Queensland's winter carnival will now boast seven million-dollar feature races after significant prizemoney boosts were signed off on by Racing Queensland officials during the week. 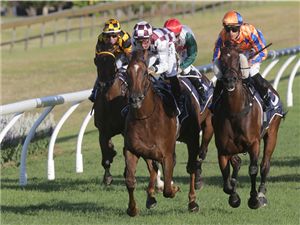