Prix du Jockey Club winner Mishriff, one of the best horses in Europe last year, is being aimed at the $20 million Saudi Cup on February 20.

The John Gosden-trained colt is likely to start as one of the favourites for the world's richest race after the $20 million event was nominated by Saudi owner Prince A A Faisal for the son of Make Believe.

"The Saudi Cup is Mishriff's target," said Prince Faisal's racing manager Ted Voute. "Realistically there is not a lot for him to go for before Royal Ascot.

"At the backend of last year John and the prince discussed it and provided he gets a good draw we are hoping he has a good chance. It's exciting."

Mishriff was a little-known winner of a Nottingham maiden when he lined up last February as a 16-1 chance in the Saudi Derby, run on the King Abdulaziz racetrack's dirt oval as one of the support races to the inaugural Saudi Cup.

The colt's subsequent second place proved the springboard to a Classic-winning campaign in which he won the Prix du Jockey Club (French Derby) two starts later followed by the G2 Prix Guillaume d'Ornano at Deauville.

"The prince hasn't seen him for a year and it is in his home country, although that's not the primary reason," explained Voute. "He does what's best for the horse – he ran very well there last year and he is bouncing at the moment.

"It's a mile and one, instead of a mile and two," Voute added. "I think we are going to enter him in the Dubai World Cup too and if he ran particularly well, it might be on the radar."

Mishriff was ridden by retained jockey David Egan in Riyadh last year but he was only able to partner the colt once more to a Listed win at Newmarket during a Covid-impacted season. Ioritz Mendizabal took over at ParisLongchamp, and Frankie Dettori was in the saddle for two subsequent outings, including when Mishriff was only eighth on soft ground behind Addeybb in the Qipco Champion Stakes at Ascot.

"We have re-retained David, and at this point he is likely to ride," said Voute. "Last year was a bit of an up-and-down year with not being able to get jockeys in places we wanted to, and David couldn't get to France.

"David is in Bahrain at the moment," Voute added. "He has agreed to renew his contract. He rode Mishriff there last year and the Prince said that would be his first choice."

Nominations for the Saudi Cup meeting are expected to be released this week. Trainer Bob Baffert revealed on Sunday that leading US performer Charlatan is set to feature among Mishriff's rivals in Riyadh. 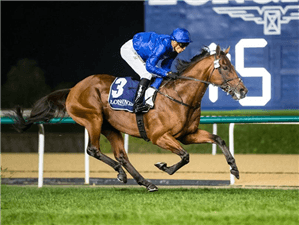