Dubai Carnival 2021: ‘The last time I won on one that easy was Dubai Millennium!’ – Frankie Dettori

With four winners, Godolphin dominated the second night of the Dubai World Cup Carnival for 2021 on Thursday, as Soft Whisper and Frankie Dettori excelled. Here’s some stuff you might like to know …

Soft Whisper: the world's her oyster according to Saeed Bin Suroor

On a night dominated by Godolphin, Soft Whisper provided the star turn with a contemptuous triumph in the UAE 1,000 Guineas that had trainer Saeed Bin Suroor mentioning future targets across on three continents.

While it wasn't the strongest race in the world, Soft Whisper could hardly have won it any easier as she sauntered home eased down by Frankie Dettori to trounce her rivals by seven lengths.

In the short term, Bin Suroor is hoping for an invitation to the Saudi Derby, while the UAE Oaks is an obvious target at Meydan, where the UAE Derby also looks a legitimate option on World Cup night.

After that, the homebred daughter of Dubawi (out of a Sea The Stars mare) could even target the Kentucky Oaks on dirt, though the European Classics on turf might feature on the agenda for a filly described as "top class" by her trainer, who was winning the first UAE Classic for the 12th time.

Frankie Dettori: 'The last time I won one that easy was Dubai Millennium!'

After another double in the last two races for Bin Suroor, Frankie Dettori is back where he used to be: leading the Dubai Carnival jockeys' table with four winners from the first two cards at Meydan. Nobody else has more than one.

Dettori reported that he hadn't had to do much when it came to Soft Whisper. "I just said to Saeed, the last time I won on one as easy as that was probably Dubai Millennium!" he said, referring to the 2000 Dubai World Cup.

"So it only took me 21 years to win on one as easy, but we have big hopes for her. She might not have beaten much, but you couldn't help but be impressed."

If Soft Whisper required little assistance from the saddle, Dettori was seen at his brilliant best on the enigmatic Bedouin's Story, whom he delivered on the line from the rear in a last-gasp success in the concluding turf handicap.

You can't beat City Hall … but you can come seventh

Like so many other Meydan cards in the past, the second night of the Dubai World Cup Carnival was nearly all about Godolphin as Sheikh Mohammed's team claimed four of the five thoroughbred contests.

The card ended in a two-all draw for trainers Charlie Appleby (Ya Hayati and Althiqa) and Saeed Bin Suroor (Soft Whisper and Bedouin's Story), who both now have three winners at this year's carnival.

Nowhere was this more obvious – and perhaps unattractively so – than in the Zabeel Turf, a Listed handicap over 1m2f in which Godolphin had the first six home, led home by unexposed Ya Hayati at the head of an Appleby 1-2-3.

Godolphin's all-blue silks were carried by more than half the field in the 15-runner event. They must be running out of colours for the caps – perhaps the Dubai team could borrow a couple from Gigginstown.

Cape Verdi: three in a row for Appleby and Doyle with Althiqa

After victories with Poetic Charm and Magic Lily, Charlie Appleby and James Doyle completed a hat-trick in the Cape Verdi with Althiqa, who pounced from the back off a keen pace that did for the joint-favourite Summer Romance.

Well-fancied Stunning Beauty also over-raced and dropped out last in the $163,000 feature.

Godolphin have won eight of the last ten runnings of this G2 contest, including the last half-dozen, with Bin Suroor on the mark from 2016-18. MInd you, this is surely one of the weaker races for the status on the international calendar.

Those who watched Althiqa bump runner-up Stlisque a furlong out won't be surprised to learn that James Doyle got a three-meeting suspension for careless riding. The jockey pleaded guilty and will miss the Meydan carnival meeting on February 12 plus cards at Abu Dhabi and Al Ain.

The opening thoroughbred race, the Al Bastikiya Trial, went to one of the carnival's more cosmopolitan visitors with a winner for South America in the shape of El Patriota (Antonio Cintra/Vagner Leal).

On his previous outing, El Patriota had won the Gran Premio Nacional – or Uruguayan Derby – the final leg of his nation's Triple Crown at Maronas in Montevideo. Now his connections are eyeing the Al Bastikiya itself on Super Saturday [March 6] and the UAE Derby three weeks later.

Ridden by Brazilian jockey Vagner Leal, he appreciated every inch of the 1m1½f trip to run down his rivals in the final furlong and take his record to 3-3 since he was switched to dirt.

'I believe the whole country is watching this race' – Antonio Cintra

Uruguay has a proud equine tradition, as El Patriota's trainer Antonio Cintra explained.  "Uruguay has a huge passion for horse racing," he said. "I believe the whole country is sitting close to their TVs to watch this race. My mobile hasn't stopped ringing ever since our horse won. I am very happy for the country and for the Uruguayan people, and for Uruguayan horses."

Cintra, who has five horses in Dubai, saddled Heart Alone to win the G2 Al Shindagha Sprint under Mick Kinane in 2006 at Nad Al Sheba.

Representing Brazil in those days, Cintra hadn't had a runner in Dubai for more than a decade before this year's return; he comes to Meydan hot off a historic 1-2-3 in Uruguay's top race, the GP Jose Pedro Ramirez, on January 17.

Antonio Cintra (El Patriota's trainer): "We know this is a very good horse and were very hopeful, but this is a big result and we are delighted to win with him. These conditions were ideal and, I imagine, we will stick to them in the Al Bastakiya and UAE Derby. It is very special to have another winner in Dubai, a full 11 years after the previous one!"

Vagner Leal (El Patriota's jockey): "This horse is a young horse, a very good talent and today to win this race is very important – for us, and for Uruguay."

Mickael Barzalona (Ya Hayati's jockey): "That is my first Godolphin winner in a pink cap! I won on Star Safari last year, so was happy to track him as I knew he was a good horse who would be thereabouts at the finish. We had a lovely run round, then he quickened well before staying on strongly. It was a good performance in a typically competitive carnival turf handicap."

James Doyle (Althiqa's jockey): "She has really quickened nicely there when I asked her. Analysing the race beforehand there looked to be a few who would go on, so after a slow start, I was happy to settle her in behind. She really hit the line well, so will definitely be worth a crack at the extra 200m in the Balanchine Stakes. Before tonight, we thought 1,600m was as far as she would want to go, so that was very pleasing."

Saeed Bin Suroor (Soft Whisper's trainer): "She got confidence when she won last time. She was blowing really hard after it, she needed it, she wasn't really fit enough but still won. She worked really nicely a week ago, the trial put her spot on for this. She's improving all the time and the trip is fine.

"We'll keep options open, obviously the UAE Oaks and even the Derby are possible, or if she is invited to Saudi, we'll speak to Sheikh Mohammed about that. She's a filly for the future – we'll enter her in the Kentucky Oaks and think about the European Classic races. She's a top-class filly – she won by seven lengths but she could have won by further if she wanted."

Frankie Dettori (Soft Whisper's jockey): "She missed the kick last time, but jumped really good today. I was always in position A and in control. When I kicked, she went, it was as simple as that really. I didn't have to do much and she's got a bright future.

"Saeed has mentioned everything – Saudi, the UAE Oaks, the UAE Derby – when they win so impressively you can get excited.

"I just said to Saeed, the last time I won on one as easy as that was probably Dubai Millennium! So it only took me 21 years to win on one as easy, but we have big hopes for her. She might not have beaten much, but you couldn't help but be impressed.

"We'll take it one step at a time, nothing tested her today, so it would be wrong of me to say how good she is until she faces better competition." 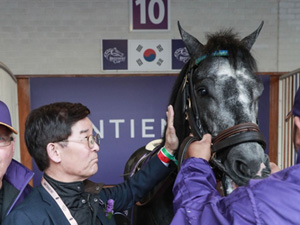