The chestnut four-year-old by Reset was caught behind the eight-ball behind a weakening horse upon straightening, but under two-time Singapore champion jockey Vlad Duric's expert guidance, he pulled himself out of that pickle to go and reel in Gold Star (Patrick Moloney), who was being hailed the winner at the 200m.

Well supported into $20, Real Success  got a nose in front of Gold Star right at the last hop with Chalaza (Simon Kok Wei Hoong) third another half-length away. The winning time was 1min 22.16secs for the 1400m on the Short Course.

A former two-time winner (1200m and 1325m) and two-time placegetter from only eight runs in Australia when prepared by the Ng family's Victorian trainer Matt Laurie, Real Success has certainly reproduced that handy form in only a few starts in Singapore.

One first win second-up in a Class 4 race over 1400m and now a second hurrah at his third start when lifted in grade, even if trainer Michael Clements still rues the one that got away on debut.

"When he arrived, he showed us a lot. I'm still surprised he got beaten first-up (fourth to Federation in a Class 4 Division 2 race over 1200m on June 9)," said the Zimbabwean-born handler.

"In hindsight, he took time to acclimatise. He didn't look good in his coat.

"He clocked time today. It's a pretty fast time for this class.

"He was in a good position, but turning for home, a horse came back on him and closed him in. He was in a pocket.

"Luckily, Vlad got the split. He's a big horse with big strides, and when that happens, it's usually difficult, but he recovered very well.

"He's looking for the mile. He's a horse with a lot of ability."

Duric echoed the same bullish sentiments about Real Success by saying the razor-sharp margin was not a true reflection of Real Success's potential.

"He had his winter coat on and Mike clipped him. It started to grow through," said the Australian hoop.

"He had not acclimatised, but he was slowly coming good in his coat. I only saw him after a race was cancelled, I haven't seen him for a while, but he had changed and he really impressed me in his trial. It was a big step forward.

"Today, when they anchored up, Benny (Woodworth on Elite Incredible) slid around us and we were caught on the backfoot, but he showed his class and was too good for them.

"The margin doesn't do him justice. If he had got out earlier, he would have won by a much bigger margin.

"He impressed me today, he's very good and he will progress right up. Let's see what Michael has planned for him."

In only three starts, Real Success has already made around $70,000 in stakes money, which is about on par with the A$69,550 he picked up from his two wins and three placings in Australia (Pakenham and Geelong). 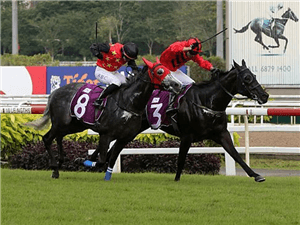