JIUYI (2) - Was gallant in defeat last start in an unsuitable affair. Better suited stepping up in trip and drawn to map perfectly. Will take beating.
SATURDAY (9) - Performed below market expectations last start but can make amends in a suitable assignment here. Gets the blinkers on for the first time, so expect a bold showing.
SHOW ROYALE (10) - Drew a poor gate on debut and was never in the hunt. Well drawn to perform second-up and will relish the journey. Knockout hope.
SABAH STAR (8) - Performed fairly on debut. Open to improvement and looks well suited stepping up in trip. Worth including in the mix.

WATER ROCKET (2) – The return of Barend Vorster in those iconic Fred Crabbia colours could unlock this Argentinian-bred three-year-old's winning flair. Looked a winner at his last start. If he can come across early from his wide gate, he will be a major force to reckon with.
QIJI DIAMOND (1) – Has done nothing wrong so far, especially at last three outings. Seems to handle both turf and Polytrack. Only query is the top impost as there is not much of him.
MIGHTY VAIN (10) – Showed vast improvement second-up. Beaten by a smart sort in Delaware that day. Services of in-form jockey Benny Woodworth is a plus.
KRUGER (9) – Never a factor at his second start. Was a lot more forward on debut when a closing third to Tom Cat. Deserves another chance

SIAM ROYAL ORCHID (3) – Hard to get past Siam Royal Orchid. The former top three-year-old beat all but the promising Field Marshal last time out. Extra two furlongs will suit down to the ground.
OCEAN CROSSING (4) – Genuine sort who keeps hitting around the mark. Trip right up his alley. Not without claims if he gets a trouble-free run.
SUPER TYCOON (2) – Useful type who might get a chance to follow closer to the speed from the handy draw this time. Go close.
SPIRIT OF BIG BANG (7) – Won impressively at his third try, although he didn't beat much. Faces sterner test here but is still capable of sneaking into the minors even if the sticky barrier might pose a bit of a challenge.

EXCELLING (7) – Finds life tougher in Class 3 company but has not taken a hiding either. Last couple of runs were encouraging. Draws a good barrier for once.
WASSERGEIST (4) – Not the most reliable specimen around, but his winning barrier trial of October 31 could spell a form turnaround here. Keep safe.
DINGHU MOUNTAIN (3) – On the quick back-up after his fast-finishing fifth after threading a needle through a jam-packed finish. Jessica Eaton copped a three-day ban on him as a result and would love to get one back on him.
RED DAWN (9) - Like a fine bottle of red. Defied his age to give his younger rivals a galloping lesson last start. Needs things to go his way, though. Include in calculations.

YULONG EDITION (2) – Gold Cup castoff who will find this easier. Hard to knock his recent runs and if he gets his way in front, it will take a good horse to pass him.
DICTON (1) – Just like Yulong Edition, he could not get a berth in the Gold Cup. Former top French stayer who has not been able to live up to that tag here. Seldom outclassed, though. Can outstay this lot with a bit of luck.
WIND TRAIL (5) – Ran out an impressive 2000m winner last time out. Meets stronger opposition but there is no reason why he can't reproduce that form in this. Place claims.
LARRY (11) – Loves that trip. Won two of his three races over 2000m. Expect to see him steaming home late.

HIGHGATE (7) - Was dominant in easier grade last start but there was plenty of merit in the performance. Must find another gear but is open to further improvement, so must be respected.
SIAM MP (3) - Consistent performer who has developed a serious record in a short career. Only narrowly beaten last start and can fight out the finish with a repeat dose.
BUSHIDO (2) - Hard to knock on recent efforts. Finds conditions to suit and has the advantage of the inside draw. Worth considering on best efforts.
BLITZ POWER (9) - Doesn't map great but if there is added pressure upfront, she can flash late to make things interesting. Don't ignore.

INFERNO (1) - Classy performer who remains unbeaten from three career outings. Will strip fitter for this assignment second-up and will take beating yet again. Superstar of the future.
FIELD MARSHAL (2) - Hard to knock on what he has shown so far. Has to convert his form back onto the turf surface but is capable of fighting out the finish with the right breaks.
ROCKET STAR (7) - Worth forgiving last start when not everything went to plan. Maps to get a good run just off the pace and will pounce late. Major player.
BLUESTONE (4) - Didn't have a lot of luck last start but is better drawn in this affair. Expect major improvement here second-up, so don't dismiss.

FEDERATION (9) - Consistent performer who is hard to knock on recent form. Returns to this affair after a break, so monitor parade/market, but will take beating if he is forward enough.
CHARGER (6) - Has been a model of consistency in recent times. Drawn to map perfectly and will give a sight. Major player on best efforts.
UNCONQUERED (10) - Recent efforts have been on the Polytrack surface but has performed well prior on the turf. Drawn to take up a forward position and is capable of giving some cheek with the lightweight.
HELIOSPHERE (1) - Has been tending to mix form but is worth following this prep off the back of a spell. Must be kept safe.

KING LOUIS (5) – After a string of near-misses and bad luck, King Louis' crowning moment may have well arrived in the race that matters the most. Beaten by pedestrian pace in the Raffles Cup, he had I'm Incredible in his sights as he loomed large inside the last furlong, but missed out by a lip. Top pick.
SUN MARSHAL (7) – Has the tactical speed to go forward from the middle draw even if stablemate Super Dynasty is also a noted on-pace runner and has drawn an alley. Showed at his last start in the QEII Cup that his poor run in the Raffles Cup was just a blip. In brilliant form and will take running down if the track takes a soaking.
I'M INCREDIBLE (4) – An absolute revelation this year. Won five in a row with the last three at Group level. Biggest asset is his never-say-die attitude. Will be tough to get past especially with the hard-riding Vlad Duric in the saddle.
GOLD STRIKE (13) – Hard to get past his name. At the weights, he gets in with a rough place chance. Trainer Cliff Brown knows what it takes to prepare a horse for such events.

MADE IN RUSSIA (1) - Has mixed his form severely but is talented on his day. Lost his compass last start but if he puts his best foot forward, his rivals will know he is there.
LIM'S PASSION (3) - Returned to the winner's circle last start over this track/distance. Still has the upside to improve, so expect a bold showing with a repeat dose of last start.
HARDCORE (2) - Exited last preparation with a strong victory over further. Will likely be better suited later in the preparation but is worth including for the exotics.
DELAWARE (7) - Won in easier company second-up. This is harder, but he is drawn to take up a prominent spot. Don't ignore. 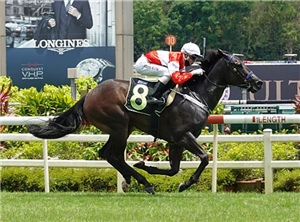