Star three-year-old Inferno remains a cut above the rest, however it appears a good battle behind with a few nice types stepping out in recent months.

His nearest rival Big Hearted is rated 89, having finished second behind the star galloper and has won his next two starts. 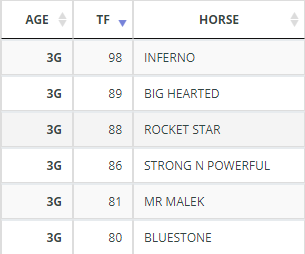 An impressive maiden winner at his second start, he was unable to match Inferno at his next few starts, but continued to race well.

A noted backmarker, it was a big positive to see him not only relish the step up to 1400m, but also race more prominently.

Pushed early to hold a position from the inside draw, he travelled sweetly for Duric settling in the 1X1.

Under a good hold entering the straight, he ambled up to the lead and once cut loose inside the 300m, he put them away in a few strides.

Backed off the boards, Rocket Star was sent out the $1.20 favourite and was never ever going to get beat.

A winner of two of his seven starts, Rocket Star is now rated 88 by Timeform and is looming large as he should continue to improve.

Two races prior, the Lee Freedman trained Mr Malek also made his return, when dominant over the 1200m journey.

A dominant maiden winner (4.8L) prior to a break, Mr Malek picked up right where he left off when a cosy winner under Vlad Duric.

Given a 10/10 from Duric, he took full advantage of a dream run and while over-racing a touch early, once asked to let down, he quickly drew clear and won easily.

Now rated 81 by Timeform, when adjusting for sectional mark ups, he is projected to reach mid-to-high 80s at his next start and is certainly a force to be reckoned with.

Over the weekend we saw another promising 3YO step out, with the Cliff Brown trained Bluestone very impressive on Saturday evening.

While only a narrow winning margin in the seventh event, his closing splits were very impressive and he too has very similar projections to Mr Malek.

Although clearly no match for his stablemate Inferno in their sole meeting, confident he is trending the right way and can win many more races.

Only few horses do what he did late, he is a must follow.