BOOM SHAKALAKA (2) – Forget he ran at his last start. Apprentice jockey Hakim Kamaruddin could not control him and he also returned underweight leading to the horse's disqualification. Days as a promising juvenile feel remote. Has slipped down the ratings since and if he shows glimpses of his 2YO form, he should take this.
SUN CONQUEROR (9) – Not without ability, but has often had tough runs. Not the biggest horse around. If he gets a troublefree run in transit, he can measure up to this lot.
ELITE BEAST (4) – From one of the in-form stables at this season relaunch. Might need longer but the second of his two wins came over 1200m. Marble one. A threat if he gets an economical run.
HOSAYLIAO (6) – Doesn't win out of turn but is honest in this class. Having champion jockey Vlad Duric on his back might see him find a couple of lengths. Will be thereabouts when the whips are cracking.

KHARISMA (1) - Blinkers are now added to this improving 3yo for the Copperbelt team. He has run well at all three runs to date and sets the standard in this heat with champion jockey Vlad Duric booked for the first time. The one to beat.
EUNOS AVE THREE (2) - Has shown placed form on both the turf and the all-weather back in January and the run when second to The Wild Bunch is very good form and puts him in here with strong claims.
SKY EYE (3) - Won a latest trial in 61.79 on July 16th. Has shown bits and pieces of form already and the stable had Per Incrown run well on July 11. Place hope.
MARCUS ANTONIUS (11) - Mark Walker-trained 2yo. Dam is a half-sister to twice Group 1 winner Riva San (Queensland Oaks and Derby 2008) and although might need more time judged on pedigree, he is an interesting runner in this.

ROYAL PAVILION (7) – Was racing in great heart before the break. Has shown he had lost none of his form during his work and barrier trials. Stable is in rattling form. Go close.
AL GREEN (2) – Flew home for fourth at his last start on July 11. Rider was queried. Can put up a big show if he can follow a little closer to the speed.
LUCK OF FRIENDSHIP (5) – Lost a shoe at his last start. Constantly making headway, and looks to have taken plenty of benefit from the break. Ready to show his wares.
QIJI ACHEEVA (6) – Has speed to burn but had no luck at his last start when posted deep. Wide barrier makes job tougher, but he can still make amends with some luck in the running.

HEARTENING FLYER (6) - The Michael Clements barn know what it takes to ready a newcomer and this 3yo looked very impressive in his trial on July 14 under Louis-Philippe Beuzelin. The horses with form set a fair standard, but it may well prove fruitful to side with this son of Excelebration.
BRUTUS (1) - Has plenty of form in the book and is now stepping up to 1200m. Comes from a powerful stable and can go very close.
LADY FAST (10) - Has put together a couple of nice performances so far in a short career and won a trial in June to boot. Receives a bit of weight from the boys and the booking of Marc Lerner is no negative.
ACHIEVED MORE (2) - The wide draw isn't much of a help here but has run some good races in defeat and has to be respected as one of the stronger hopes on the back of a good course and distance run last time.

SWEET ANGELINE (2) – Handy filly who won well on debut. Has since impressed at the trials, so will take a tonne of beating yet again. Commands respect.
KNIGHT LOVE (10) – Another impressive debutant winner from the Michael Clements yard. Will take benefit from the break to grow and mature. Big watch here on return.
BAFFERT (1) – Has been tending to mix form but career credentials warrant respect in this affair. Don't ignore.
LEGEND ROCKS (5) – Last won over a mile but has shown his versatility on a number of occasions. Monitor market/parade.

BRING ME JOY (10) - In what is not a strong race even for this level, a chance can be taken with this lightly-weighted runner for Leslie Khoo on the back of both a good run and trial.
TURF BEAUTY (7) - Has trialled well like a lot of the stable runners lately and is a couple of points lower than her last win. One of the more likely victors here.
SPORTSCASTER (3) - Trip is all wrong for Mark Walker inmate but was in decent form when last seen and it wouldn't be the greatest shock to see a bold show.
EXCELLENT MOON (11) - Up five points for winning last time to the lofty mark of 27 now. Has place claims judged on that success.

DRAGON DUKE (2) – Has been struggling to win but has a great fresh record. Credentials must be respected, so monitor market/parade.
COMING THROUGH (1) – Hard to knock on recent efforts. Had no luck last start, so must be respected on the quick back-up. Major player with even luck.
BLUESTONE (11) – Progressive customer who has a serious future. Isn't ideally drawn but can contend at the business end if he is screwed down for this first-up.
BLITZING (6) – Interesting newcomer who has a few stamps in his passport. Has trialled fairly well leading into this so the market will be the best guide.

SHOWBOUND (1) - Won a recent trial well enough and isn't as exposed as some of these in this contest. Would look the most logical starting point in this race.
GOLD PRIZE (4) - Clearly not the easiest to train and has run some good races in defeat thus far. The overall balance of his form is more than good enough to win a race like this and should be high on anyone's shortlist.
SUPER PINS (2) - There were certainly some positives to take out of his fourth placing to Frey on July 11 and connections are happy to go again this coming Sunday. Can give a good account.
FAST AND FEARLESS (6) - Can prove best of the rest here. Place chance for in-form stable.

DRONE (1) – Now 12 points below his last winning mark and the drop to this grade is something of a 'last chance saloon' for Drone. A very capable Polytrack sprinter on his day in Class 4, he hasn't had all the luck in the world and hopefully he can find his best form here.
DECRETO (9) - Has an excellent course and distance record and is incredibly well handicapped on the pick of his form. Has trialled well prior to this start and if on song, he can win this.
FOUNTAIN OF FAME (8) - Not at all disgraced in a couple of Restricted Maidens and has shown enough in recent trials to warrant plenty of respect in a race like this.
MISS MICHELLE (2) - Went close on stable debut last time out and on the balance of her form, she is one of the more interesting runners.

CHURCHILL (8) – Has returned in great order this preparation. Hard to knock on race form and recent trials. Will take beating.
SURGE (9) – First-up at 1200m is the only query with this horse but his recent trial was very pleasing. Capable of contesting the business end.
BEAU GESTE (2) – Hard to knock on recent efforts. Gets in well at the weights yet again with the claim from the stable apprentice. In the mix.
LIM'S MAGIC (1) – Has been struggling to produce his best but mustn't be ignored. Keep safe for the minor end.

MA BAO BAO (9) – Despite coursing out wide throughout, he toughed it out to break his maiden tag last time out. That could be the trigger he needed. Seems to have maintained the same form. Looks well in on weights. Include in calculations.
RED RIDING WOOD (3) – This is one horse who seems to have improved under Mark Walker's care. Can run a trip, but first-up, will be suited over this distance. Warrants consideration.
SUN SPEAR (4) – Will also find 1200m a tad sharp, but if they clap on the speed, it won't surprise if he charges home late. Can sneak into the minors.
NATE'S HONOUR (7) – Ignore last run when he returned with an irregular heart rhythm. Previous runs showed he was hitting his straps. Can't fault him on the training tracks and merits consideration in this.

EXCELLING (7) – Hard to knock on recent runs and looks tuned up for this assignment first-up. Has worked well throughout the week in the lead-up, so must be respected.
ZAC KASA (1) – He may be a bit of an enigma but he is very talented on his day. Finds conditions to suit and is capable of contesting the finish on best efforts.
MY DREAMLINER (6) – Impossible to knock what he has shown so far. Isn't ideally drawn but has the ability to overcome. Major player.
SURPASS NATURAL (9) – Doesn't know how to run a bad race. He is as tough as they come and must be kept safe here fresh. In the mix.

SUPER INVINCIBLE (1) – On his two-from-two barrier trial wins, especially the latest one last Thursday, this newcomer looks poised to make a flying start to his local racing career. Trials and races are two different things altogether, but he boasts two 1,000 wins (when known as Asateer) on the synthetic surface in Australia before being bought for the Joy N Happiness Stable, better remembered for racing the great Super Easy for Super Invincible's trainer Lee Freedman's younger brother Michael. Hard to beat.
LIM'S PASSION (4) – Performed with better consistency towards the second half of last year. Yet to score on Polytrack but was not hopeless on it in four attempts. Only query is the horror gate, but if he can overcome that, he will be right in the thick of the action.
ALWAYS INNOCENT (5) – Polytrack specialist who looks right in his element here. Will probably roll forward and try to make all. Faces stiff opposition but if he is left alone upfront, he may prove hard to peg back.
JR MALONE (3) – Raced in city company in Victoria for three wins in sprint races for Melbourne Cup-winning trainer Danny O'Brien when known as Shir. Looks to have trained and trialled well. Won't surprise if he puts his best foot forward on debut.

INHERIT (1) – On the back-up. Caught the eye running home last start, so will appreciate the rise in journey. Major player with a repeat dose.
WAR PRIDE (6) – Will be more effective on the grass but has developed a respectable record in a short career. Well drawn to perform, so expect a bold showing.
CHARGER (2) – Has been struggling to win but finds conditions to suit. Worth thought on best efforts.
BUSHIDO (9) – Never far from the mark. Capable of figuring with even luck from the wide alley. Don't ignore at longer odds. 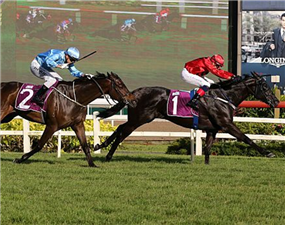