Historically, the third and final leg of Singapore's Triple Crown Series has favoured those down the bottom of the weights, with only five winners in the last 20 years lugging 122lb or more. Fifteen winners have carried 119lb or less, with five of those carrying the minimum 110lb.

On paper, that doesn't bode well for Mr Clint 's chances at successive Gold Cups, as the six-year-old rises 5lb in the weights to 122lb after winning it with 117lb last year.

In recent years, however, the Gold Cup has become a different race. In 2018 the distance was cut from 2200m to 2000m, while in 2016 the conditions of the race were altered with the weight scale compressed: a scale of two points per pound was introduced as opposed to the traditional method of a one-point difference in rating equating to 1lb.

Theoretically, this should give those in the upper echelon their chance if good enough, and it's hard to knock Mr Clint's current form after a slashing third in the second leg of the Triple Crown Series, the SIN G1 Queen Elizabeth II Cup (1800m) on 31 October.

Mr Clint forms one-part of Freedman's four-pronged attack on the Gold Cup. Last year's Derby victor Sun Marshal is set to relish the 2000m trip where he is a winner, while Minister's run in the QEII Cup was goliath after leading throughout in the rain-affected conditions, only caught inside the final 50m for a two-length beaten margin. Five-year-old Ocean Crossing – boasting a handy record of five wins and six placings from 18 starts – rounds out Freedman's runners and is his light-weight chance with 112lb.

At the other end of the spectrum and heading the weights on 126lb is Kranji's highest-rated horse in training, the Michael Clements-trained five-year-old Top Knight.

This year's Derby hero, Top Knight made light work of the extreme conditions seen on QEII Cup day, ploughing through the rain-soaked track from a near-impossible position at the bend to round up his rivals with ease, drawing away two lengths clear through the line.

Now two-from-two in sloppy conditions, Top Knight has asserted himself a notable mudlark alongside Mr Clint, and any rain about would surely be welcomed by connections as Singapore's northeast monsoon season fast approaches.

Always one to play a strong hand in Kranji's feature races, leading trainer Clements has three confirmed starters in the Gold Cup (with two emergency runners waiting in the wings), with progressive four-year-old Big Hearted and honest five-year-old Vittoria Perfetta forming the trio.

A five-time winner from 11 starts, Big Hearted looks a threat on the minimum weight and will seemingly relish the extra trip after an impressive win at his first try over 1800m 21 days ago. Vittoria Perfetta checked home third in that event after a Class 3 win over the mile prior – he will push forward and make his own luck.

Elsewhere, trainer Shane Baertschiger's top-liner Aramaayo has been a force to be reckoned with since blinkers were added four starts ago, picking up two SIN G1s – the Kranji Mile and the Raffles Cup (1600m) – along the way.

Though yet to see this distance since the move to Singapore, the five-year-old boasts solid form over it and further when raced in Australia. He was once edged out on the line in the 2018 G1 Spring Champion Stakes (2000m) at Randwick Racecourse, while he was not disgraced when third in the G2 Moonee Valley Vase (2040m) and subsequently finished just over three and a half lengths into sixth in the G1 Victoria Derby (2500m) after racing wide throughout. 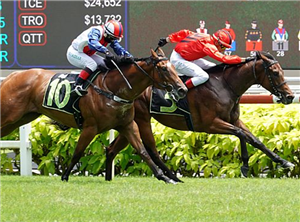