The G1 Met (2000m) tends to bring together the best middle-distance runners in South Africa and this year is no exception.

Trainer Justin Snaith has probably the biggest stable in the country and once again he has a strong hand in this race. He sends out three of the 11 runners - Belgarion , Do It Again  and African Night Sky  with Belgarion shaping as the runner they all must catch.

The five-year-old son of Dynasty has raced 11 times for eight wins and two places but it really all came together for him after he was gelded.

Belgarion was rested after that but came back to win the G2 Green Point Stakes (1600m) at Kenilworth before finishing third behind stablemate Jet Dark in the G1 Queen's Plate over the same course and distance.

He was not suited to the slow early pace and there is no question he will benefit from the additional 400m in the Met. Richard Fourie takes the reins in search of his first Met victory.

A slight concern is the wide barrier (11), but this is a small field and there is an 800m straight before the field hits the turn, so it should not be a problem.

Mike de Kock has won this race three times and he runs Irish-bred mare Queen Supreme. She comes into this race off an impressive victory in the G1 Paddock Stakes (1800m) at Kenilworth. With her five-and-a-half-pound allowance for fillies and mares, she runs in the Met as one of the best weighted runners.

Keagan de Melo rode her in the Paddock Stakes and he is up again.

Rainbow Bridge won this race in 2019 and was runner-up last year. It will come as a major surprise if he does not contest the finish. He showed his well-being last time with a solid second in the Queen's Plate and will have the services of talented young jockey Luke Ferraris, son of veteran Hong Kong trainer, David Ferraris.

Do It Again has won many of the key races in South Africa but this race has eluded him. He ran second to Rainbow Bridge in 2019 but lost his form last season. Snaith, however, seems to have him back to his best and with Anton Marcus up, the son of Twice Over has a chance to finally add the Met to his record.

In 2018, Oh Susanna became the first three-year-old filly to win the Met in over a century. Princes Calla will be looking to emulate that feat. She is trained by Adam Marcus, son of former champion jockey Basil Marcus.

Princess Calla is expected to relish the distance, carries just 113lb and has a very in-form Grant van Niekerk in the irons. 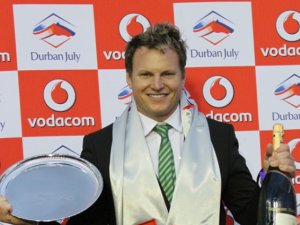