Varian runner drops in distance and class at Newcastle.

Zeyaadah  bids to bounce back from Oaks disappointment in the William Hill Hoppings Fillies' Stakes at Newcastle.

Unbeaten in her first three starts, Roger Varian's charge established herself as a major contender for the 12-furlong Classic when finishing strongly to fill the runner-up spot in last month's Cheshire Oaks.

The daughter of Tamayuz ultimately beat just one rival home, but hopes are high that a combination of a drop in distance and class for Friday evening's Group Three feature will enable her to get back on the winning trail.

Varian said: "She's in good form. Jim (Crowley) wasn't too hard on her at Epsom once her chance had gone and she actually came out of the race quite well.

"She's a lovely filly and I think 10 furlongs is probably her trip. We felt she didn't quite get home in the Oaks, particularly in what were extremely testing conditions.

"She's won on the all-weather before and I think the contours and the surface at Newcastle should be fine for her."

Zeyaadah is set to face nine rivals at Gosforth Park, including the William Haggas-trained Sea Empress.

The chestnut filly beat another promising Varian filly in Teona on her racecourse debut at Newcastle in the autumn, since when she has finished sixth in a Listed race at Newbury before winning at Chelmsford three weeks ago.

"We like her, but she's got a bit to do yet to be a stakes filly," said Haggas, who also saddles Lilac Road.

Martyn Meade's Technique is another filly dropping in grade after finishing down the field in the Oaks, while Irish hopes are carried by Jessica Harrington's Astadash. 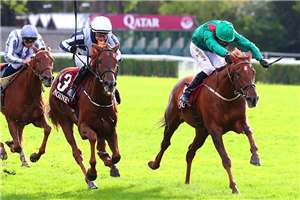