It might be stretching things to suggest that Almond Eye's intended bid for the Hong Kong Cup is the biggest boost the city's racing has had in years – but not by much.

Rumours that the Japanese star was to avoid a repeat Japan Cup attempt for a tilt at the Longines Hong Kong Cup had been circulating for a while, with some reports suggesting several of her owners had already booked flights for the weekend of December 8.

Intensive lobbying designed to allay fears about public unrest in the city appears to have paid off and Hong Kong Jockey Club chief executive Winfried Engelbrecht-Bresges, although mindful there is still a month to go, has described the news as "absolutely smashing."

Time will tell whether the Almond Eye  news leads to further international stars heading to Sha Tin for Longines Hong Kong International Races next month, but there is £9 million on offer for four Group 1 contests on one of the world's richest racedays.

Perhaps it would be asking too much for last week's luckless Breeders' Cup Turf third Anthony Van Dyck  to become the first Derby winner to line up for an HKIR race.

Then again, hopes that Almond Eye would be Hong Kong-bound seemed optimistic until Wednesday's news broke.

Saturday's Sha Tin card sees the reappearance of a major Classic contender as Champion's Way steps out for the first time since June in the Panasonic Cup over 1,400m at 7.20.

Much can happen between now and the BMW Hong Kong Derby next March, but John Size's gelding has already achieved a rating to go close in the showpiece after crowning a six-from-seven rookie season with a decisive Group 3 success over course and distance.

A powerful finish is Champion's Way's main asset – and he looked in good heart winning a recent trial – but Class 1 handicaps in Hong Kong are seldom easy from a mark of 108.

Those with long memories will recall Size's 2015 Derby winner Luger being well beaten at 1.8 in this race on his reappearance five years ago and it's interesting to note that Size also runs Time To Celebrate here.

Time To Celebrate ended last season in fine form and passed the post with more to give when fourth in the trial won by Champion's Way.

Size reports Time To Celebrate "in tremendous form" and the market could well underestimate his chance under Karis Teetan, while Encouraging is an in-form front-runner who can be expected to show up boldly again once his capable 10lb claimer Alfie Chan bags the lead.

Joao Moreira's fruitless trip to ride Constantinople in the Melbourne Cup clearly left no hangover as the Brazilian produced a couple of vintage rides to swoop late on Bullish Glory and Dancing Fighter at Happy Valley on Wednesday night.

A wide draw means something similar will be called for in the finale at 9.00, but Super Star has been highly progressive and the way that Tony Millard's gelding scythed through from the rear over course and distance last month suggests he could still be ahead of the game on a mark of 78.

Step forward Lyle Hewitson. The dual South African champ has endured a torrid 0-70 start to his Hong Kong career with admirable positivity and John Moore's Monica, who caught the eye coming home strongly in a strong race three weeks ago, is no forlorn hope from the same mark.

The morning sparring is almost over as Hong Kong's heavyweight sprinters prepare to square off against some exciting youngsters in what promises to be a hugely informative Hong Kong Sprint.

New challengers Aethero and Regency Legend both came through morning barrier trials on Tuesday, while current champion sprinter Beat The Clock and dual Hong Kong Sprint hero Mr Stunning did likewise on Friday ahead of next week's Group 2 test.

With Zac Purton unable to do the weight, Karis Teetan will be on Aethero next Sunday and the Mauritian was beaming after the powerful three-year-old eased home impressively in his turf workout.

Meanwhile, trainer John Moore remains full of confidence that Aethero is ready to move up in class. 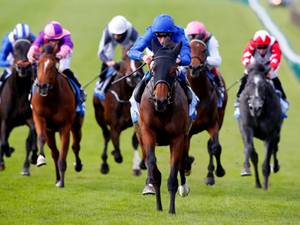