Panamanian rider Oscar Chavez was the star of the weekends racing winning five of the 12 races held on Friday night and Sunday’s race cards.

Chavez  had a total of eight rides over the two days, and was off to a flying start on Friday night with the Geoff Allendorf trained Luen On Prosperity, who broke through for his maiden win in the Class 5 & 6 over 1200 metres (turf) at his fourth race start.

Luen On Prosperity is a son of Written Tycoon (Aus) who has taken a little while to come to hand; however given his impressive victory on Friday night in a time of 1.09.3 which was well inside standard for the grade, the gelding is set for better things.

"He is an improving type whose trackwork has always contradicted his raceday form." Chavez said.

"He has also been ridden forward to lead in his three runs before today so Geoff (Allendorf) suggested that we give him a bit more time to settle and sit off the lead today.  It helped a lot with the crazy speed they went out in front. He's still very green and took a bit to get into his stride in the straight but was really strong at the end."

Chavez had to wait until the fifth of the night the Class 3 & 4 over 1350 metres (sand) to notch up his second winner for the night in Lucky Pearl.

Lucky Pearl, who contrary to his name has been a real luckless galloper of late with bad getaways and two lots of interference from his past three runs, was able to turn that all around under Chavez for a narrow win

Premier Choice from the Alan Tam yard gave Chavez three for the night when he scraped home per medium of a lovely rails hugging ride to win by a neck from Lucky Gold (Breinell Yamzon) in the Class 4 over 1050 metres.

On Sundays turf program Chavez picked up where he left off on Friday with a last to first performance on the Geoff Allendorf prepared Victory Supreme who was able to nail Northern Legend (Charlie Chan) on the line to win the first of the day, the Class 4 over 1500 metres.

Next up was the Class 2 & 3 over 1200 metres and another winner for Geoff Allendorf on the Australian import Oneofthegreats to give Chavez five for the weekend.

"Yes it's been a great weekend.  That's for sure."

"Oneofthegreats has always shown ability and is a nice horse that will run from 1200 to 1500 no problem. I was a bit worried about the wide draw (11) but we had a quick jump and I was able to get across easily and sit off the leader Striking Brahma.  Once in the straight he was really strong at the finish."

"Victory Supreme has been a bit of difficult horse that is still very green and a bit field shy. Today from the wide draw (11), Geoff (Allendorf) said to just come right back and ride him patiently and then give him clear running in the straight. He really showed a good turn of foot over the last two hundred and he will keep improving if we ride him this way."

For the past two seasons Chavez has spent much of his time in Macau posting 30 winners last season ending up in fourth spot in the Jockeys' Premiership behind Brazilian Ruan Maia.

With 16 winners posted this season and only four behind the Premiership leader Roger Yu, Chavez looks a super chance of taking the crown should he focus on Macau for the remainder of the season.

Pearl Green showed his class in Sunday's Group 2 Winter Trophy with a dominant victory lumping his 130 pounds with ease over the 1800 metres in a personal best time of 1.47.8.

Ridden by Fausto Henrique, Pearl Green ducked his head down just as the gates opened and came out very slowly. Henrique never panicked and cut across the back of the field and settled third last in the run, a lot further back than most anticipated.  Still well back at the six hundred the son of Fastnet Rock (Aus) moved within striking distance of the leaders before the turn. He let down magnificently in the straight to power on by of Luen On Dance Kid (Oscar Chavez) who like most of the field had a 14 pounds pull in the weights on Pearl Green.

Trainer K H Leong has done a fine job with the now six year old, having won 12 races and placed on 13 occasions from his 29 starts in Macau, with well over $5 million HKD in prize money.

The performance of the day on Sunday was without doubt the Danny Wong trained Éclair Sunshine who simply ran his opponents off their legs in the Class 2 Over 1500 metres.

Given a daring ride by Frankie Choi, Éclair Sunshine was let run freely from the 1200 metres and opened up a seven length break on the field. Passing the seven hundred he extended that to a whopping break of more than 10 lengths.  Showing great stamina in the run down the straight, Éclair Sunshine held on to win by three lengths on the line from Big Alloy (Luis Corrales) who ran on well from the back, with Sixth Sense (Stephane Ladjadj) in third. 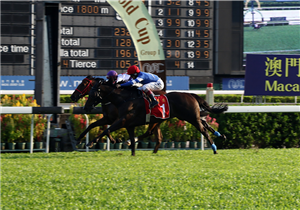