The Racing and Sports Priceline for the 2020 Poule D'Essai Des Poulains.

There is free form, ratings, videos, speed maps and more all available at Racing and Sports - Click here.

The interesting point about the colts heat is that the key lead ups, the Lagadere last season and the Fontainbleau three weeks ago, were run at not just steady tempos but farcically slow tempos. That leaves the form very patchy indeed.

The best performance was that of Victor Ludorum  in the Lagadere where he showed off a powerful closing burst to win like one much better than the final result - and he was sent around deep odds on in the Fontainbleau as a result.

He was plain there, however, this time the late splits off the slow tempo painting him in a fairly ordinary light relative to a few others in the race - Kenway and Ecrivain in particular.

Ecrivain has run well in both of those races, been in the market in both of them, and looks nailed on to run well again this evening. Victor's Lagadere win, and strong connections, mark him down as the favourite but the betting edge may end up siding with Ecrivain.

The fillies lead up, the Grotte, on the same card at the Fontainbleau was a much more genuine contest, and returned a faster time than the colts. Favourite there Tropbeau scrambled in and did it well enough to think she has a good chance tonight, but her margin was certainly slim and both Dream And Do and Tickle Me Green (the least likely of the trio) must be anchored to her price somewhat.

That little split them in a well-run race leaves the feeling that there is no standout performer there, and that leaves the door wide open for new blood. The obvious one to fit that bill is Simeen . Up in class but looking much better than the horses she rounded up at Chantilly when resuming, and it's very easy to envisage her spiking her rating right into the ballpark of those fillies from the Grotte. 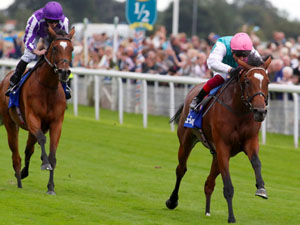