Love  made it a Classic double as she ran right away with the Investec Oaks at Epsom.

Winner of the 1000 Guineas for Aidan O'Brien and Ryan Moore last month, Love was sent off the 11-10 favourite to follow up over 12 furlongs.

Love was ridden with restraint by Moore in the early stages, as stablemate Passion  and outsider Tiempo Vuela  set the early gallop, with the pair pulling well clear of the field until the home turn.

However, Love could be noted making her move around three furlongs out and while main market rival Frankly Darling tried to follow her, the winner had far too much pace.

She shot clear in the final quarter-mile to eventually come home nine lengths clear of fellow O'Brien runner Ennistymon, with Frankly Darling back in third for Frankie Dettori.

Moore said: "She was exceptional today. We've always thought she's very good and she proved that in the Guineas, but today she's taken a step forward.

"Almost her best furlong was her last furlong. She's got a great temperament and I don't think she could have been any more impressive, really.

"You never expect to win an Oaks by that far – I don't know how far she won, but it felt like a very long way.

"Hopefully there's plenty to look forward to in the future – she'll be a threat to anything."

O'Brien said: "We're delighted, obviously. Before the Guineas we thought the mile might be a little bit short – we always felt she'd get a mile and a quarter well and she's very genuine and tries hard, so we were always hoping the extra distance was going to improve her.

"She was working incredibly well – her last few canters during the week were incredible, really. Obviously you never know what is going to happen, but we felt she was very well."

On training eight Oaks winners, he added: "We're in a very privileged position to train such horses. The lads put in so much day in, day out with the families and the bloodlines.

"This filly is very special – it's very hard that you could ever have a better filly. You saw what she did in the Guineas – winning by three or four lengths – and she doubled it today.

"It's only her second run of the year and it's amazing really."

On future plans, he said: "Obviously we'll wait and see and the lads will decide in the next few days.

"The Irish Oaks (July 18) was a possibility, so we'll see how she is over the next few days.

"I think you'd have to think about the Arc in the autumn – we know what three-year-old fillies can do in the Arc. I suppose it all depends how she comes out of today and whether she has a midsummer break now or takes another run and has a break after that.

"I think everything is possible with her and it's just a question of what the right thing is to do. The St Leger comes three weeks or a month before the Arc and if she was going to the Arc, would be it be too tough for a filly to run in the Leger beforehand? I don't know.

"We'll see how she trains and see what the lads really want to do."

John Gosden said of Frankly Darling: "She ran a good race, just didn't handle the track, and got in a muddle down the hill. He (Dettori) felt on a flat track she would have been second – but she would never have beaten the winner." 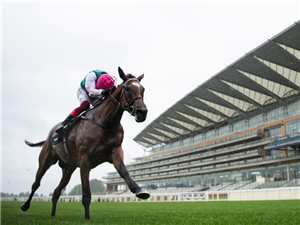