Judicial lays down the law in Chester feature

Smart performance from eight-year-old with racing back on the Roodee.

Judicial  continued in top form to take the Listed #chestertogether Queensferry Stakes, as racing returned to the Roodee on Monday.

Second in the Palace House Stakes during the week racing resumed and winner of the Chipchase Stakes at Newcastle after that, the 6-4 favourite was always travelling with some menace and the race was quickly over once the gaps came, with two and three-quarter lengths the margin over Major Jumbo.

It was a third course success for the Elite Racing Club-owned gelding, and Rodriguez told Sky Sports Racing: "He's amazing, isn't he? He's eight years old and probably in the best form he's ever been.

"That was pretty straightforward. We had a good draw, they went a nice gallop up front and I was able to keep him balanced and keep filling him up.

"It was more when I went and not getting to the front too soon, but even when I did get to the front he kept going strongly to the line.

"He's a big horse and has a great record around here, but at the same time he can take a bit of organising so I just wanted to let him find his feet and manoeuvre if I needed to.

"He was going so well – I knew I had the horses in front of me covered and I'd have been surprised if anything had come from behind me and picked me up."

The race was run in torrential rain and in the early stages Silvestre de Sousa found himself three wide on the bend.

A winner on debut, Andrew Balding's youngster was a 5-2 chance to maintain his unbeaten record, with Zamaani the odds-on favourite.

Tom's Reign Beau set the pace with Zamaani comfortable in second, but De Sousa tracked the market leader into the straight before picking up smartly.

De Sousa said: "He's a nice horse going forward and Andrew's horses always improve. He won his first race and won very well, but we thought he would come on for the run and he has come on. This race will probably bring him on again.

"It was a really competitive little race. I wouldn't like to go any further (than six furlongs) at the moment, we should keep to that trip. It's sharp round here, but he coped well and is a nice horse for the future.

"He's had two runs and I've not had to touch him behind the saddle, so it will be interesting when we ask him to go a bit quicker, but he's a nice horse going forward."

As with all fixtures in Britain, the meeting took place behind closed doors due to restrictions around the coronavirus pandemic.

Chief executive Richard Thomas sincerely hopes that is a situation that will change in the future and crowds can be welcomed back.

He said: "You would have to have a crystal ball to know what is going to happen. I think it is safe to say if we are looking at 2021 and we didn't think we'd have a crowd we wouldn't be racing – I think it's that serious.

"The large racecourses will not be able to continue racing in this current format, with huge wage bills that they have to run their businesses. So it is a really difficult time.

"We are really hopeful and are planning that way (to have crowds back), but we are very nervous that that might not happen." 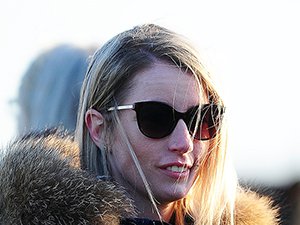