The Wertheimer Brothers have a number of trainers based around France. Racing Manager Pierre-Yves Bureau announced Édouard Montfort will be joining the ranks which includes trainers such as Fred Head, Carlos-Laffon-Parias and Christophe Ferland and receiving horses from the famous racing and breeding establishment to compete in the famous blue and white colours.

Winner of the G3 Prix des Chenes (1600m) Policy Of Truth gave stud farm Haras de Bonneval resident sire Siyouni his thirty-seventh individual Stakes winner when winning at Longchamp last Thursday. He was purchased for €30,000 at the 2019 Arqana Deauville October Yearling Sale by his trainer Pia Brandt and her husband. This takes his record to two wins from three starts.

Well performed Calaska de Guez has been retired following a career of sixty-four starts for twenty-three wins and almost €560,000 in prizemoney. Bar her final two race starts, she was trained throughout her career by Jean-Michel Bazire. A decision as to which stallion she is to visit is yet to be decided.

The Arqana Yearling Sales were held in Deauville last week. Some 416 Yearlings were offered with a clearance rate of almost 75% (310 going under the hammer). The average price was €121,605 and median €70,000. Highlight of the sale was the Dubawi-Starlett's Sister filly who sold for €2.5m. She is a half-sister to Sotssass and other well-performed relatives.

Apprentice Manon Germian recorded her first race victory aboard Ascot Gray at Marseille-Borely last Friday. Going to the lead in the final 100m, she steered the horse for a two-length victory.

Eric Raffin has driven or ridden 200 race winners this season confirming his number one position in the French rankings. Winner of the title in 2019 for the first time, he continues to be the driver/rider to beat again this season. As of last week, he had driven 167 winners and 33 in mounted contests. Of Group races, he has won fifteen (same as in 2019) including the G1 Prix Albert Viel with Helgafell.

The feature Swedish three-year-old races will be held at Solvalla on 26 September and French stallions have seen their off-spring qualify to compete in the feature events. Bold Eagle will be represented in the Oaks with Eagle Eye Sherry and in the Critérium Brambling and Henry Flyer. Other runners with a French stallion are Ester Wibb (Orlando Vici), Twigs Honor (Voltigeur de Myrt, Blakc and Quick (Up and Quick) and Fire Piston (Ready Cash).

Fallout from the G1 Irish Championship Stakes (2000m) and preparations for the Prix de l'Arc weekend included Jean-Claude Rouget confirming Sottsass would remain targeted for the 'Arc' indicating that he believes the horse is now looking for 2400m. For the winner Magical, trainer Aidan O'Brien believes 2000m is her preferred distance and the G1 Prix de l'Opera was his preferred route but did not rule out a start in the 'Arc'.

Anglo-Arab bred horse Genmoss, winner of the Grand Prix des Anglo-Arab (2400m) at Chantilly on Saturday remains undefeated after thirteen race starts and in winning, broke the record (on the flat in France) of successive race wins beating the AQPS horses Gloria IV.

For Pierre Pilarski, prominent owner of horses across most racing codes in France, it was a memorable thirty-minutes on Saturday when Face Time Bourbon (part-owned) won the G1 Prix de l'Etoile (2200m) at Vincennes followed by Gemmoss in the Grand Prix des Anglo-Arab at Chantilly (2400m).

As a stallion Bold Eagle recorded his first two-year-old winner of the season when It's Eagle Coglais defeated, I Believe Delo, also by Bold Eagle, at provincial racetrack Moulins-la-Marche.

Connections of Face Time Bourbon have confirmed a journey to Naples, Italy, to contest the Lottery Grand Prix at the end of October. Safety of the Champion horse will be paramount, and he will be accompanied by two Security Guards upon arrival until his departure. This is to protect him from any potential kidnapping or other event that may injure the horse. Race tactics have already been considered with the horse to be shod for the heats and in the final potentially removing the hind shoes however retaining shoes on the front legs.

Following her success in Ireland last Sunday in the G1 Flying Five (1000m) Glass Slippers will now be considered to defend her title in the G1 Prix de l'Abbaye (1000m) on Prix de l'Arc de Triomphe day. The last horse to win back-to-back 'Abbaye's' was Lochsong in 1993-94. 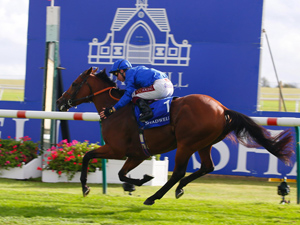