Mick Kinane hailed a "top-class professional and top-class man" as he paid tribute to his long-time weighing-room colleague Pat Smullen.

Smullen, who died on Tuesday evening at the age of 43 following a brave battle against cancer, succeeded Kinane as stable jockey to Dermot Weld at Rosewell House on the Curragh in 1999 and enjoyed huge success in the role.

Smullen went on to become Irish champion jockey nine times and was a multiple Classic winner, landing the Derby in 2016 aboard the Weld-trained Harzand.

"He was a gentleman. He came to Dermot's, things moved on and he took over my job and did a fantastic job for a long time," said Kinane.

"Unfortunately he couldn't win his last battle, but he tried so hard."

One of Smullen's keenest rivals throughout his career was Johnny Murtagh, who is now a successful trainer – and as recently as Saturday Smullen was still in touch with his old friend.

"I had a big winner on Saturday (Champers Elysees in the Matron Stakes) and one of the first messages I had was from Pat saying 'well done, Johnny, brilliant win' so he was showing class right up to the end.

"He set the standard in the weighing room in Ireland, everyone wanted to be like him – he was the champion jockey in Ireland in more ways than one.

"He leaves some legacy. We knew all about him in racing, but it wasn't until he retired the wider community got to see what he was like, raising all that money for cancer research and pulling so many people together for his charity race last year.

"In and out of the saddle he was just a really great guy and my thoughts and now with Frances (wife) and the kids and his mam, all his family. It will be a tough few days, but we look on his life and career with very fond memories."

Newmarket trainer Hugo Palmer will always be grateful for his association with Smullen.

The pair teamed up for a number of big-race victories – most significantly with Covert Love in the Irish Oaks at the Curragh in 2015, as Smullen and the filly gave Palmer his first Classic success.

Palmer said: "I'm hugely saddened by the news that Pat has died. A finer jockey or finer man is impossible to imagine really.

"He was always a star to work with before and after a race, and was invariably brilliant in a race. He rode some great winners for me early on in my career.

"Short Squeeze and Gifted Master were two of the key ones, but his efforts aboard Covert Love in both the Irish Oaks, which was our first Classic, and in the Prix de l'Opera, which was a thrilling victory and an extraordinary ride, were things that I will remember forever.

"I'm just incredibly grateful not only for what Pat did for me and my career, but also to have known him. My heartfelt sympathy to his wife Frances and their three children."

Smullen also steered Harzand to victory in the Irish Derby for owner the Aga Khan. Pat Downes, general manager at the Aga Khan's Irish studs, said: "It's very sad news. We had some great days. Obviously Harzand's two Derbys were the highlight.

"A great jockey, but also a great person and he battled hard for the last two years.

"It's a terrible loss to his family – Frances, and (children) Hannah, Paddy and Sarah, and it's just so sad, but I think in time we can all look back and feel lucky we have known him. He was a really great person."

One of Smullen's most remarkable associations was with the Weld-trained Famous Name in the Juddmonte silks of Khalid Abdullah.

Abdullah's racing manager Teddy Grimthorpe said: "Famous Name won 21 races, and 20 of them were at Listed or Group Three level – Pat rode him to win every single one. You can't imagine that that has happened many times

"He was an incredibly talented jockey, but an even better human being. I know Prince Khalid was incredibly fond of him as well, both as a rider and a person.

"He was a rare breed of a man, as he showed with his work for charity.

"His life may not have had great quantity, but it had fantastic quality." 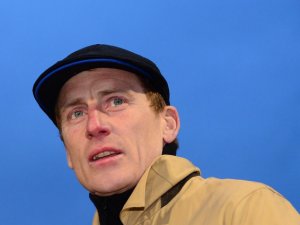