Dandalla tops 12 in the hunt for Cheveley Park glory

Dandalla  and Miss Amulet are two of 12 fillies in contention for the Juddmonte Cheveley Park Stakes at Newmarket on Saturday.

Karl Burke's Dandalla is set to step up to Group One company following back-to-back Group Two wins in the Albany Stakes at Royal Ascot and the Duchess of Cambridge at Newmarket.

The Ken Condon-trained Miss Amulet earned her tilt at the the top level by winning the Group Two Lowther Stakes at York last month.

Condon said: "All going well this week, she'll be heading to Newmarket – she's in good form and everything has gone well since the Lowther.

"We've all the usual checks and balances to do during the week, but providing she comes through those all OK, we'll be looking forward to Saturday."

Condon confirmed Ryan Moore is set to partner Miss Amulet for the first time, with the filly now running in the colours of Doreen Tabor.

She could be joined on the trip from Ireland by Fozzy Stack's Aloha Star, Jessica Harrington's Dickiedooda and Aidan O'Brien's pair of More Beautiful and Mother Earth.

Aidan O'Brien is responsible for six of the 11 remaining entries for the Juddmonte Royal Lodge Stakes.

Forty horses have stood their ground for the bet365 Cambridgeshire, with Mick Channon's Certain Lad heading the weights ahead of William Knight's Sir Busker and Montatham from William Haggas' yard.

However, Charlton has warned Tempus is not a certain runner.

He said: "I think his participation in the Cambridgeshire depends on the going.

"The ground was very quick at Newmarket at the weekend. There is rain forecast, but he won't be running on fast ground." 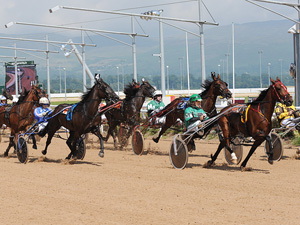