Supremacy  led his rivals a merry dance and held off Lucky Vega to win the Juddmonte Middle Park Stakes at Newmarket.

Clive Cox's youngster had impressed in the Richmond Stakes last time out, but the quality of the race was so deep that Supremacy was sent off a 13-2 chance.

Given a strong wind at the track, Adam Kirby employed the same prominent tactics as he had done when winning the Rockfel Stakes on stablemate Isabella Giles 24 hours earlier and Supremacy was never really headed.

His task was made slightly easier by halfway when Frankie Dettori's saddle slipped on the keen-going Method and he had to call it a day before the race began in earnest.

Shane Foley was eager not to give the leader too much rope on favourite Lucky Vega, but Minzaal was dropped right out at the back and ended up making up plenty of ground into third.

Supremacy was not for catching, though, prevailing by half a length, with Minzaal beaten a further two and a quarter lengths.

"It was superb. I'm overjoyed. He has been amazing really. From the Richmond, I think he has continued developing and strengthening all the time," said Cox.

"He is a complete speedball and likes to get on with it. Adam has ridden him beautifully and got the fractions right. I'm just delighted the way he has finished off.

"I'm really excited about him next year, as he has got more development and strengthening to do over the winter. He is just pure class.

"(This year's Commonwealth Cup winner) Golden Horde had a little bit more size and scope at this stage of his career and was second in this race. He is another very good horse, but most importantly they are both talented.

"He has got that speed and that is what he likes to get on and do. We realised at Goodwood it was certainly not the wrong way to ride him. I'm just very happy how it has all panned out.

"I wouldn't have thought he was overlooked, but some people obviously thought it – people have short memories.

"We've had a tremendous season, especially with the two-year-old crop as they have been amazing.

"Any winner is special, but that feeling of standing on that stand, even though there wasn't a huge crowd around us, it was still extremely satisfying.

"We had a wonderful Royal Ascot as well and it has been a wonderful year for us, in spite of the shenanigans." 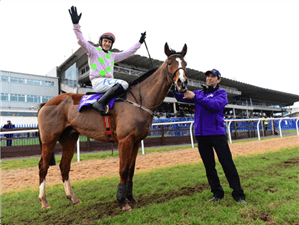