Tips and preview for the 2020 Champion Stakes at Ascot.

The Grand Final of a British flat season like no other takes place with Champions Day at Ascot this weekend. While once again we go without any fanfare off the course the fields have come up a treat and the betting looks fantastic.

We've run the Racing and Sports Pricing Model over the card and it has found it's share of intereting angles against the early markets, including in the feature, the Champion Stakes, where Magical heads up the early betting.

And so she should, but it's not a race without chances and last year's winner must again see off last year's runner up Addeybb on ground that suits him.

Less than a length seperated them on that occasion and Addeybb has backed up his big effort there with a couple of big ratings since, including in Scotland last time. The fact that his good ratings have come outside the typical sphere for Champion Stakes winners seems a factor in early betting which seem to undersell him a bit around 10-1.

At 2-1 v 10-1 the ratio between the pair is fairly similar to last year but his chances seem more robust this time around and the Racing and Sports Pricing Model certainly feels that way.

Japan might also be a bit big having started 6/4 v Addeybb and Lord North at the same course and distance in the Prince Of Wales but he was well beaten by them there and throws up more bad runs than good.

As it stands Addeybb each way is the appealing play in the feature.

From the undercard, both the Queen Elizabeth and the Champion Sprint have obvious favourites and seem priced up about right with no obvious angle to take there. Happy Power is perhaps a bit too big at 20-1 in the sprint, turned out quickly after winning well at Newmarket last week, but he is a fringe player at best in truth.

Stradivarius takes up the role of obvious favourite in the Long Distance Cup, a race he was rock'n'rolled in last year, and Dermott Weld's Irish Leger winner Search For A Song looks a very decent chance of giving the Irish another win over the champ as she hits the race at full tilt off a big peak and for a yard that know what they are doing here.

Around 6/1 seems very fair about her here and prices around 9/2 seem very fair about Dame Malliot in the Fillies and Mares after she stuck on well in a good Prix Vermeille last time. She had the better of Wonderful Tonight and Even So who are both high up in the betting and it took two very good ones to beat her home.

A case could be made that she should be a clear cut favourite in this and soft ground will pose her no concerns at all. 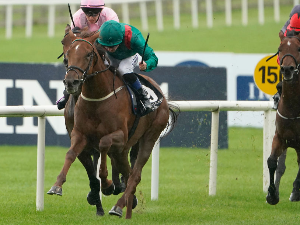