John Gosden believes a return to a more conventional style of racing will help Stradivarius  regain his title in the Qipco British Champions Long Distance Cup at Ascot.

His last two races have come in France over a mile and a half in the Prix Foy and the Prix de l'Arc de Triomphe, and Gosden feels he is unsuited to the sprint finishes that invariably prevail across the Channel.

The champion stayer could never strike a blow when seventh to Sottsass in the big one, but Gosden is confident he will show his true colours back in a race he won in 2018 and has been placed in twice.

Gosden said: "The Arc was run very much in the manner of a typical French style race, where they went steady then quickened.

"Having spoken at length with Mr (Bjorn) Nielsen (owner), the plan next year is to go for a fourth Gold Cup – and as he won't be running until May, here we are at the end of the season and we thought we would have a go at the Champions Day race.

"The ground at Royal Ascot (where Stradivarius won his third Gold Cup this summer) was what I would call 'wet soft', and this is going to be more 'holding soft'.

"It has been very wet – and unless we get some rain overnight, it will be riding holding and a little bit sticky. I think the ground will worry a lot of people – because most horses like to get through it and they like it loose wet, rather than holding.

"Last year it was run on the inner track. He ran a great race. They (Stradivarius and Kew Gardens) crossed the line together, and he was beaten a nose. The year before, he and the jockey (Frankie Dettori) did a Houdini act in getting out of a box that had been nicely set up for them."

Search For A Song, trained by Dermot Weld, is seen as Stradivarius' biggest rival on Saturday – having completed back-to-back victories in the Irish St Leger on her latest start.

"It was great to win this race with Forgotten Rules (in 2014), and we'd love to win again, " said Fiona Craig, of owners Moyglare Stud.

"Hopefully the ground isn't too soft, because I'm not sure she'd want a bog.

"We'd rather not be taking on Stradivarius, obviously, but he did run in the Arc a couple of weeks ago. I know they're saying he didn't have a hard race, but he still ran a mile and a half in heavy ground.

"Our mare is going into it and good form, and she's fresh and well, so we'll what happens."

Weld, seeking a third win in the race, said: "Search For A Song has never raced over further than a mile and six, but she wasn't stopping at the end of the St Leger – and that's what is giving me the encouragement to have a crack at it."

Aidan O'Brien sent out Kew Gardens to just deny Stradivarius 12 months ago, and the Ballydoyle trainer has a team of three this time in Sovereign, Dawn Patrol and Broome.

"Sovereign was going for the Arc, and they all can't run in the Champion Stakes. We always felt he would get further than a mile and a half," he said.

"Broome hasn't run in a long time, but we always felt he would stay further than a mile and a half, and he seems to be in good form.

"Dawn Patrol won a Group Three at the Curragh over two miles last time. He handles an ease in the ground, we think.

"He probably wants to be ridden a bit patiently, but he looks very comfortable over two miles. We were very happy with him the last day at the Curragh.

"Stradivarius is a great horse, and it will be a very competitive race."

Andrew Balding has contrasting views on ground conditions for his two runners, Spanish Mission and Morando.

"Spanish Mission was very impressive in the Doncaster Cup last time. He's a horse who historically has not wanted the ground too soft, so that's a concern for him," said Balding.

"Morando, on the other hand, loves it when the mud is flying. It's a new venture going two miles with him, but the way he's shaped in his races in the last two seasons suggests that two miles is well within his compass now – and he goes well at Ascot."

William Haggas realises the task facing Monica Sheriff, who has yet to hit form this term after going through last season unbeaten in four races.

"She's very well, but she's got a lot to do. I'm hoping rather than anything else," said the Newmarket trainer. 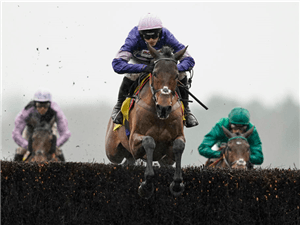