Essential Quality  was reported to be in good shape taking another step on the road to the Kentucky Derby in his stride with an impressive victory in the Southwest Stakes at Oaklawn Park on Saturday.

Winner of the Breeders' Cup Juvenile at Keeneland in November, the Godolphin-owned grey broke slowly but was soon on the heels of the leaders under Luis Saez.

Making smooth progress around the turn, Brad Cox's runner easily picked up Jackie's Warrior as he powered to the lead.

Cox will now consider the Blue Grass Stakes at Keeneland on April 3, or the $1million Arkansas Derby back at Oaklawn the following weekend as the next stop for his unbeaten Tapit colt.

"Big performance off the layoff," Cox said. "Hopefully, we can take another jump or two forward, I think, in order to win the Derby. Hopefully, he has it in him.

"We'll get with the Godolphin team, between Jimmy Bell and Dan Pride, and come up with a plan. I'd have to say either the Blue Grass or the Arkansas Derby. That's about the only thing, really, that makes sense.

"If something happens as far as weather goes, I guess you could probably look at the Florida Derby. But in this region of the country, I think the most logical spot would be the Arkansas Derby or the Blue Grass."

Cox has never had a Kentucky Derby runner, but this year can number Caddo River and the Juddmonte-owned Mandaloun on his potential team for Churchill Downs alongside Essential Quality.

Caddo River  is scheduled to make his next start in the $1 million Rebel Stakes on March 13 at Oaklawn. Mandaloun is on course for the $1million Louisiana Derby on March 20 at Fair Grounds.

"It's all coming together like we kind of envisioned it a couple of months ago," Cox said.

"But we've got two more months, and on the Derby trail that's a long way."

Cox had plenty to cheer at Oaklawn on Sunday, too, as the brilliant Monomoy Girl got her six-year-old career off to the perfect start with a stylish success in the Bayakoa Stakes.

Cox said: "It's kind of a relief to get it over with. I was proud of her. She ran big. I think just given the post and the way they broke and laid going into the first turn, it set up well for her.

"She always kind of gets that little bit of a wide trip. Nothing really out of the ordinary. It means a lot. I'm very proud of what she accomplished. Very, very pleased with what she was able to accomplish and bringing her to Hot Springs means a lot. It's a great racing town. The Saratoga of the South, I guess you could call it.

"There were a lot of fans here and I think they appreciate our team bringing her here."

In other Kentucky Derby news, Shug McGaughey's Greatest Honour also impressed on Saturday in the Fountain of Youth Stakes at Gulfstream Park. He looks set to run in the Florida Derby next (March 27). 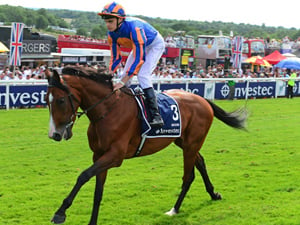