Group One winning juvenile Sword Of State will join Cambridge Stud’s stallion roster at the conclusion of his racing career.

Te Akau Principal David Ellis has confirmed that the exciting young son of champion sire Snitzel has been secured for future stud duties by Cambridge Stud, in partnership with his current ownership.

Raced by the Te Akau 2020 Four Colt Breeding Syndicate, Sword Of State  was purchased by David Ellis as a yearling for A$600,000.

The quality two year old has won four of his five starts in his first season, including the Gr.1 Sistema Stakes (1200m) at Ellerslie in March, beating his rivals by 3-½  lengths.

A month earlier he had put his rivals to the sword in the Gr.3 Waikato Stud Slipper (1200m) at Matamata where he never gave his opposition a look in with a 6-½ length victory.

"The ease and times of Sword Of State's wins in New Zealand saw him installed as one of the favourites for the ATC Sires' Produce Stakes (Gr.1, 1400m) at Royal Randwick," Plumptre said.

"He was second favourite behind Anamoe when he was unfortunately withdrawn due to the unfavourable soft tracks in Sydney.

"He is the only Group One winning colt by Snitzel currently in training and he will be a terrific addition to Cambridge Stud and the New Zealand thoroughbred breeding ranks."

Sword Of State will likely be named New Zealand's Champion Two-Year-Old as the winner of four of his five starts in his juvenile season, and is out of the precocious Encosta De Lago mare In The Vanguard, who was runner-up in the Gr.2 Sweet Embrace Stakes (1200m).

Ellis is pleased to continue his burgeoning relationship with Cambridge Stud, with former Te Akau Group One winner Embellish already standing at the farm, and Cambridge Stud principals Brendan and Jo Lindsay enjoying racing a number of exciting horses through Te Akau's barn, including multiple Group One winner Probabeel.

"Sword Of State is a magnificent colt physically, with a superb temperament," Ellis said.

"It's so important to have quality horses like Sword Of State for the New Zealand industry, colts that will perform at the highest level on the race track and then stand at stud.

"I have been committed to this goal for over a decade and we are proud to already have Embellish, who I likewise purchased, standing at Cambridge Stud.

"Brendan and Jo Lindsay have been involved in the ownership of Sword Of State from the time I purchased him. Their commitment to this industry is massive – they continue to invest and innovate and the industry certainly benefits from their passion.

"We will focus on campaigning Sword Of State in Australia in the new season and further enhancing the resume of this already valuable colt.

"His future racing will see him carry the black and gold colours of Cambridge Stud just like his multiple Group One winning stablemate Probabeel." 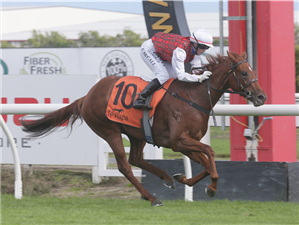