Japan’s obsession with the Qatar Prix de l’Arc de Triomphe is set to be renewed this year after G2 winner Deep Bond was put forward for the latest mission to Paris.

The four-year-old colt came close to making his G1 breakthrough on Sunday when finishing runner-up in the Tenno Sho (Spring) won by World Premiere. He could be joined in France by star mare Chrono Genesis, narrowly beaten by Mishriff in the Dubai Sheema Classic.

Deep Bond races in the same ownership as Contrail, the winner of the Japanese Triple Crown last year who features prominently in ante-post betting for the Arc.

However, Contrail has priorities at home and will not run in the Arc, so owner Koji Maeda has announced Deep Bond will be his candidate for the ParisLongchamp showpiece, which celebrates its 100th anniversary on October 3.

Deep Bond will warm up for the challenge in the Prix Foy on Arc trials day on September 12 ahead of the Arc, in which Orfevre (twice), Nakayama Festa and El Condor Pasa have all endured near-misses for Japan.

"He showed a lot of courage in the Tenno Sho, which is a very demanding race," said Maeda. "Although the ground was very quick on Sunday at Hanshin, he is a son of Kizuna, who himself finished fourth in the Arc in 2013, and he can handle softer ground. He is the right horse for France in the autumn."

Deep Bond has recorded three wins from 12 career starts. He finished fifth behind Contrail, who retires to stud at the end of the season, in last year's Tokyo Yushun (Japanese Derby) and this year won the G2 Hanshin Daishoten before his second place in the Tenno Sho, which is run over 2m. 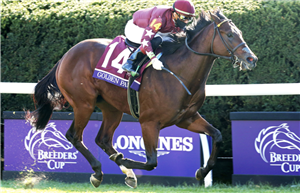