Aidan O'Brien has high hopes Japan  can follow in the footsteps of St Nicholas Abbey, having got his career back on track with victory in the tote+ Pays You More At tote.co.uk Ormonde Stakes.

'St Nic's' best days seemed behind him when he arrived at Chester in 2011 as a four-year-old, having missed the Derby – for which he was favourite – and been well beaten on his return from a lengthy lay off.

He blitzed his rivals that day, though, and never looked back. He won the Coronation Cup on his next outing and added the Breeders' Cup Turf, another two Coronation Cups and the Sheema Classic to his CV. So should Japan emulate that haul, then O'Brien will be happy.

Japan landed the Grand Prix de Paris and Juddmonte International as a three-year-old, but went winless last season, so a confidence-boosting win over Ascot Gold Cup hopeful Trueshan, who emerged with plenty of credit, was just what the doctor ordered.

"We were delighted. Last year we started him in a very competitive race (Prince of Wales's) and it just didn't work out through the year – but obviously nothing was straightforward last year and his season went into reverse afterwards," said O'Brien.

"We used this race with St Nic before and he got into a good place afterwards so we're hoping this horse might do the same.

"Obviously he's in the Coronation and that is kind of what we had one eye if everything went well. He ran well in a Derby there (third). It was all about confidence today and getting him started."

Japan has previously mixed his races over 10 and 12 furlongs, yet despite this victory over almost a mile and three-quarters, he will not be experimenting with Cup races.

"He definitely wouldn't be running over anything further than today, we'd be going back in trip rather than forwards," said O'Brien.

Ryan Moore was on board and insisted he had never doubted Japan's class.

"He's a beautiful horse who we've always held in high regard and he's won a Juddmonte," he said.

"Hopefully that will give him a bit of confidence, he didn't really enjoy that dead ground. He's a lovely looking horse with a great mind and hopefully he can go on from here.

"The Coronation Cup is an option, he ran well in the Derby there and this should set him up for the bigger races later in the year. I'd expect him to come on from this as well. He's got some class – I've always had a very high opinion of this horse."

The rider added: "The ground is just sticky enough for him and the trip probably stretches him, but he has loads of class and it's good that he's come back with a win."

Giving Japan a real race – and a weight concession of 5lb to the 13-8 favourite – was Trueshan, and Alan King was understandably delighted with his Champions Day hero, who will now head for the Ascot Gold Cup.

The Barbury Castle trainer said: "I'm absolutely thrilled with him and I've just spoken to Hollie and she feels the same.

"It's great to get him out and get him started and I think he's run a terrific race. I'm very pleased.

"He's a wee bit slow out (of the stalls) and you just have to roust him a little bit, but Hollie got him into a lovely position and all in all it was a terrific run.

"That (Gold Cup) will be his next stop if the ground is right. We'll just have to see what the weather does in June."

Trueshan was ridden by Sky Sports Racing ambassador Doyle, who said: "I was pretty pleased, the only thing was Withhold didn't take me very far.

"I thought I'd got the better of Ryan turning in, but he just prevailed.

"I can't knock my lad, he probably wasn't at home on this track so there are big things to come from him." 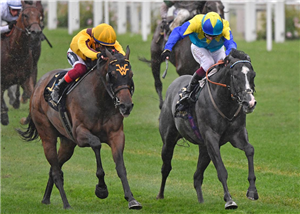