Smith, 54, equalled the record set by Jerry Bailey when riding outsider Hard Not to Love to win the La Brea Stakes, then guiding Omaha Beach to land the Malibu Stakes, a historic 217th top-level victory.

His milestone successes were two of four winners for Smith on the opening day of the season at Santa Anita. The veteran jockey won the Robert J. Frankel Stakes with Mirth and the Lady of Shamrock Stakes on Brill.

History-making Omaha Beach, making his first start since his shock defeat in the Breeders' Cup Dirt Mile, was held up by Smith before delivering his challenge three furlongs out to win comfortably.

The Richard Mandella-trained three-year-old is set to run in the Pegasus World Cup on January 25.

Smith told Bloodhorse: "It's just amazing, and this horse [Omaha Beach] speaks for everything. He's just beautiful, so fun to be around, so fun to ride, and so fun to train. It just shows how great this horse really is.

"I'm so happy and so blessed to be a part of it. To surpass Jerry on Omaha Beach even makes it that much more special."

Of Hard Not To Love's win, he added: "My hat's off to West Point Thoroughbreds, John Shirreffs, and the whole barn, so many people. They work so hard with this mare.

"She has one eye [her right], so she gets a little bit of anxiety at times. We work hard with her and it's great to see the hard work that we put in pay off today."

Smith's 217 Grade 1 successes include 26 Breeders' Cup wins, two victories in the Kentucky Derby and success in the 1991 Irish 2,000 Guineas on Fourstars Allstar. His defining moment came when riding Justify to land the 2018 Triple Crown. 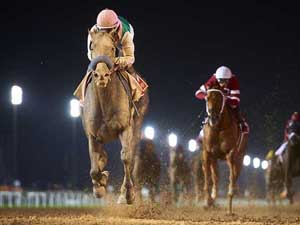