The Breeders’ Cup Classic is in play for Happy Saver after his victory in the Jockey Club Gold Cup at Belmont Park on Saturday.

The Wertheimers' homebred took his unbeaten record to four in the time-honoured G1 event, which is a 'Win and You're In' race for the Classic at Keeneland on November 7.

"That's what we're going to think about," Pletcher said. "We'll see how he bounces out of this and let him take us there when he wants to. Speaking to the Wertheimers last night, they're in no rush and they plan on racing him next year."

Happy Saver is a son of Pletcher's Kentucky Derby winner Super Saver. "What he's been able to accomplish you don't see very many other horses do," the trainer added.

Happy Saver beat Godolphin's Mystic Guide by three-quarters of a length in the Jockey Club. The runner-up seems unlikely to reoppose at Keeneland.

"Most likely we will bypass it, but that won't be officially decided until we take a good look at the horse and see how he's doing," said trainer Michael Stidham.

"We've got a lot to be excited about," he added. "We were careful with when we ran him and where he ran him throughout the year, and it paid off. We're going to try and parlay that into next year."

Breeders' Cup Juvenile favourite Jackie's Warrior earned a Beyer speed figure of 100 – the highest of 2020 by a two-year-old – in his 5½-length victory in the G1 Champagne at Belmont.

Frizette winner Dayoutoftheoffice is on course for the Breeders' Cup Juvenile Fillies after becoming a first G1 winner for her trainer Timothy Hamm in his 25th year with a licence. 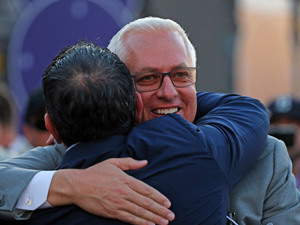