Godolphin trainer Charlie Appleby is set to break new ground with a small team of four horses stabled in New York ready for the Belmont Stakes Festival in early June.

UAE Derby winner Rebel's Romance, who is set to run in the Belmont Stakes on June 5, will be joined by stablemates Desert Peace, Summer Romance and Althiqa.

"Rebel's Romance and Desert Peace are going to ship out on Saturday from Dubai," said Appleby, speaking to the NYRA (New York Racing Association) media team. "The two fillies, Althiqa and Summer Romance, are going to join them on Sunday and ship into Belmont and New York on Sunday at some stage."

Rebel's Romance was under consideration for this weekend's Kentucky Derby before Godolphin opted to wait instead for the final leg of the Triple Crown.

"Althiqa and Summer Romance are going to both head to the Just A Game [G1 on Belmont undercard] and it's undecided where Desert Peace will run during Belmont Stakes weekend," said Appleby.

"If Summer Romance were to run well, she has a second option of stepping up a bit farther at Saratoga in the Diana," he added. "I'm looking forward to it. We're getting in there earlier so that we can acclimatise and get used to the track." 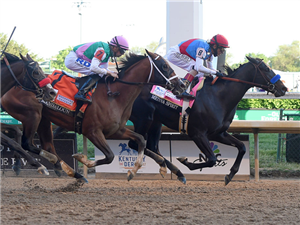