He's got a huge international fan base and has added another G2 to his impressive record.

Friday at Newmarket under Oisin Murphy the Saeed bin Suroor trained stable favourite won his second Joel Stakes.  Murphy bemoaned the missed start at their last outing but on Friday with good going the veteran was too good for them.  Pogo led for much of the race and held on to second on 14/1 and favourite Master of the Seas was third but it was his first start since the 2000 Guineas.

Earlier Jessica Harrington saddled her 5th Group winner for the month when Forbearance won the Princess Royal.  Shane Foley was on board and it was his only mount of the day and he starts a suspension on Saturday which means he will be able to ride the whole 155kms o the cycle race in memory of Pat Smullen, which is raising funds for Cancer trials in Ireland.

Favourite Sayyida was 2 ¼ lengths away in second and Sea La Roca 11/2 third.  Albaflora was a scratching.

The Rockfel Stakes G2 gave the David Loughnane trained filly Hello You her first Group win as she beat home the Boughey trained pair of Cachet 9/1 and Oscula.  The other two 5/1 runners Jumbly and Girl on Film followed in 4th and 5th spots.

Saturday's card has the Royal Lodge G2 for 2yo c&g over 1600m with 7 runners.  Andrew Balding's El Kabeir colt Masakela is on top here on 15/8 with Oisin Murphy on board.  Godolphin's Dubawi colt Corebus is 9/4 for Appleby-Buick and we like the look of Royal Patronage 11/4 from Mark Johnston with Jason Hart riding the Wootton Basset colt.

The Chevely Park G1 for the 2yo fillies over 1200m has attracted a field of 13. Sacred Bridge by Bated Breath is undefeated in her 4 outings to date with Colin Keane riding for Ger Lyons.

Sandrine by Bobby's Kitten brings some American speed into her pedigree and has had 3 wins and 1 second to date.  She's on 4/1 with David Probert riding for Andrew Balding.  Zein Claudette is a lovely filly by No Nay Never and has 3 wins from 4 starts for Ismael Mohammed who has booked Ray Dawson for the ride – they are on 5/1.  And a bit of a roughie here – Corazon, by Markez, is up in trip here but we think she will have no trouble.  William Buick is riding for George Boughey and they are 14/1.

The Middle Park G1 is over 1200m for 2yo colts and 10 to run.  Perfect Power is 2/1 for Richard Fahey and he's got Christophe Soumillon over for the ride.  He's by Ardad and has 3 wins from 5 starts to date.  Dr Zampf is on 9/2 for Ger Lyons and Colin Keane and the son of Dark Angel has 1 win from 3 starts.  Go Bears Go is on 6/1.  By Kodiac Bear he's with David Lughnane and Rossa Ryan will ride.  We rather like Asymmetric on 15/2 for Alan King and Martin Harley he's by Showcasing.

The Cambridgeshire is a Heritage Handicap over 1800m and has a field of 34 to pick from which is why these heritage handicaps are loved by punters by the despair of tipsters.  For the record the top three in the market are Magical Morning on 11/2 with John Gosden looking for his 6th win the race although this time he's splitting the training duty with son Thady and Frankie Dettori rides.  Astra King is 13/2 for Sir Michael Stoute and Ryan Moore and Chichester 7/1 for Keith Dalgleish and Hollie Doyle.  We have a 40/1 roughie here in Marie's Diamond who was in several top races last season and this season has been very consistent in races up North.  Adam Kirby rides for Mark Johnston. 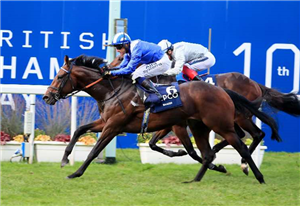