Keeneland certainly looks very beautiful at this time of year and the weather was kind.

The first of the 2yo races the Turf Sprint went to the fav Wesley Ward's Golden Pal on 8/5 with raider Ubettabelieveit third on 16/1.

The Juvenile Turf over 1600m was Gr 1 and Fire At Will certainly fired starting on 33/1 and finishing 3 lengths in front of Aidan O'Brien's Battleground with Ward's Outadore third .  Cadillac was prominent throughout and finished 4th.

The Juvenile Fillies Turf saw Irish breds fill the first 4 sports with Aunt Pearl a very impressive winner and the start of a roll for Brad Cox.  She's by Lope de Vega.  Mother Earth 14/1 was 2 ½ l away second, Miss Amulet 14/1 and Campanelle followed.

Saturday started with a thrilling run from Gamine who tore away with the F&M Sprint to win by 6 ¼ lengths to Serengetti Empress who was just a nose ahead of Bell's The one.  It was a new track and race record in fact the first three races were all won in record time.

The Turf Sprint went to Glass Slippers who add this victory to her close second in the Abbaye to delight Kevin Ryan and Tom Eaves.  Wet Your Whistle was second 25/1 with Leinster third.  Equilateral didn't get a start.

Knicks Go who is owned by the Korean Racing Association's Stud won the Dirt Mile.  He already had the track and distance record and established a new record with the run which beat Jesus' Team (pronounced the Spanish way He-soos) on 50/1 with Sharp Samurai third on 9/1.  Japanese runner Pingxiang unfortunately didn't get a run.

The F&M Turf 2200m saw James Fanshaw saddle a winner with his first BC runner Audraya 20/1, given a peach of a ride by P-C Boudot who was brought in for the ride when Christophe Soumillon failed a Covid test. Rushing Fall was second and Harvey's Lil Goil third on 25/1 and 4th was Lady Prancelot 80/1.  Cayenne Pepper led for a while but faded towards the end.

The Sprint over 1200m went to the 7yo Whitmore at his fourth attempt.  The old boy was pretty lively kicking out in the paddock and also behind the gates but it didn't slow him and he scored ahead of CZ Rocket and Firenze Falls 12/1.  Jasper Prince for Japan led for a while and then ran out of gas.

The Turf Mile was a wonderful result for Aidan O'Brien and may have helped morale after the knocks of recent weeks.  He saddled the trifecta with the win going to Order of Australia who only got into the field when One Master was scratched.  P-C Boudot again subbed for Soumillon and did a great job and the payout for the win was a record $148.40!  Circus Maximus and Ryan Moore were second with Lope Y Fernandez third under Frankie Dettori.

The Brazilian bred Ivar was fourth.

The Distaff was another Brad Cox winner with Monomy Girl winning this race for the second time but not consecutive.  She won in 2018 and had serious issues after which saw her out of racing for some time but Cox was patient with her and it paid off.  Swiss Skydiver knuckled at the start and blew her chances with Valiance 16/1 getting second and Dunbar Road 33/1 third.

Dermot Weld trains Tarnawa for the Aga Khan and she got the Longines Breeders' Cup Turf with Colin Keane substituting for Christophe Soumillon so that is 3 winning rides Soumillon lost.  Magical was hones as usual and was second with the unpredictable Channel Maker third.  Lord North followed and the Mogul who didn't get the best of runs a head back fifth.

The Breeders' Cup Classic ov er 2000m went to the Kentucky Derby winner Authentic, one of three Baffert runners.  Stablemate Improbable was second and long shot Global Campaign third and Tacitus fourth.  Maximum Security was fifth and looked as if he was about to get through along the fence but the gap closed. 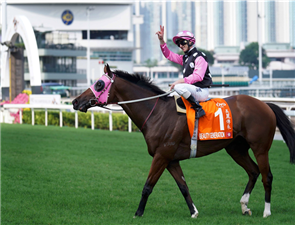 WhistleJacket News
Updated 9 hours ago
Two G1s and the start of the 4yo series at Sha Tin
Way to go Knicks Go
Two G2s in Japan on Sunday
The Pegasi without pizazz
Dubai warming up
The Argentinian Angle
Now what?
A day in the dirt
Group racing at Nakayama and Chukyo
Good Finish in Guineas Trial