It appears that there was a confusion over the horse's vaccination certificate and he was two days out of date!

This left the coast clear for Bubble Gift to win from Baby Rider and Timour and a return to the drawing board for Bolshoi Ballet's connections who had been planning the run to be a step up towards the Arc.

The Prix Vermeille was a case of shock horror as Snowfall got beaten by Roger Varian's Teona who was in the hands of Olivier Peslier.  La Joconde was third.

The Prix Foy went to the Japanese raider Deep Bond with Cristian Demuro whose brother Mirco rides in Japan although he had not been on board Deep Bond.  This was supposed to be a race for Deep Bond to familiarise himself with the track and the French style of racing and he managed both tests with flying colours.  Broome was the second home and favourite Skaletti third.

No real upsets In the Prix du Petit Couvert as favourite Berneuil stormed through to win by 3 ½ lengths fron Collinsbay 25/1 and Wild Majesty 8/1.  Our friend Air de Valse was in the mix here and finished 5th.

And the same with the win of Sagamiyra in the Prix du Pin as he started favourite, although second placed Axdavalia was on 15/1 and Speak of the Devil 4/1 third.  We are not going to mention Tropbeau again as it obviously puts the mockers on him. 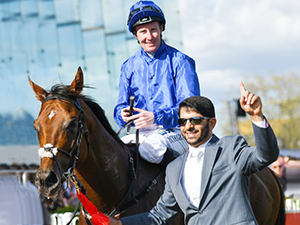