Tuvalu will return to town after recording an easy first-up win at Warrnambool.

Lindsey Smith collected his third Port Fairy Cup in a row when promising galloper Tuvalu led throughout to score at Warrnambool.

It was a dominant performance from the gelding first-up in the benchmark 84 grade race over 1400m with Smith declaring Tuvalu would head back to town for his next start.

Thursday's win was Tuvalu's fourth from six starts and bar for bumping into I'm Thunderstruck, finishing second to that galloper on two occasions, Tuvalu may be unbeaten.

I'm Thunderstruck has shown the merit of the form by going on to claim the Group 1 Toorak Handicap and $7.5 million Golden Eagle last spring.

"But he beat me fair and square that horse," Smith told racing.com.

Having his first start since scoring over 1800m at Sandown last August, bookmakers took no chances with Tuvalu who was sent out a $1.28 favourite.

"He's always been a high-class sort of horse," Smith said.

"He can roll along at that high speed and can keep building.

"That's why I thought Jarrod would be a good rider for the horse. I offered the ride to Jamie Kah, but she didn't want to come down this far.

"I've watched Jarrod ride these front runners, and he's quite good, that's why he got the opportunity."

Smith expects Tuvalu to rise into the 80's with his handicap rating and will look for a suitable race in the city in the coming weeks.

"He'll go to a Saturday race now and we'll see if he can pull one of them off," Smith said. 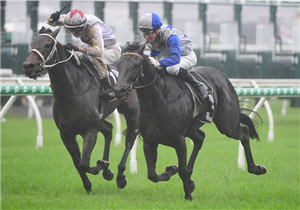