Everest contender In Her Time and her younger stablemate Graff will take their first steps towards the spring in a provincial barrier trial August 5.

Trainer Kris Lees is delighted with the progress of dual G1 winner In Her Time, who will run in the Inglis slot in the $14 million Everest (1200m) at Randwick on October 19.

It will In Her Time's second crack at the Everest after she finished seventh last year when she represented slot holder Tabcorp.

It's an ironic but not unexpected twist to see Inglis pick up In Her Time as its 2019 runner as she went through the Newmarket sale ring as a yearling in 2014 where she was retained by her breeder Peter Brown after she was passed in for $38,000.

Now a rising seven-year-old, In Her Time has since won nine of her 25 starts and $3.132 million prizemoney including G1 victories in the ATC Galaxy at Rosehill and VRC Lightning Stakes at Flemington.

Brown sold a 50 percent stake his mare to Newcastle-based Orbis Bloodstock in May. She joined the Kris Lees stable last spring after charges were laid against her original trainer Benjamin Smith.

In Her Time was spelled after finishing sixth in the G1 Newmarket Handicap at Flemington on March 9 won by Everest rival Sunlight and according to Lees is in great shape for her coming campaign.

"She is well ahead of schedule, and is getting a really good grounding," Lees said.

Lees said next Monday's trial at Gosford will clarify his plans for the mare.

"I'm not sure yet when she will resume but with the Everest being 1200 metres she will have one and maybe two runs to have her at her peak on October 19," he said.

"Nash Rawiller will ride her in the Gosford trial, but no decision has been made yet about her rider for the Everest.

"Obviously if he is happy with her he will be in line for the Everest mount."

Lees is hoping the rising four-year-old Graff will also secure a slot in the Everest.

"There aren't many slots left but anything can happen as we saw last year when there were a couple of dropouts after securing slots," Lees said.

Lees was happy with the performances of his triple G1 winner Le Romain and multiple G2 winner Invincible Gem in their second trials at Wyong on Friday.

Le Romain finished second in his 1000m heat won by Goathland while Invincible Gem filled the same placing behind Calabasas in her 1000m heat.

Lees is also training Geo, a younger half-brother to Miss Fabulass. Geo has trialled three times for three placings but was withdrawn from the Wyong trials on Friday. 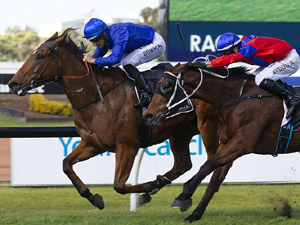